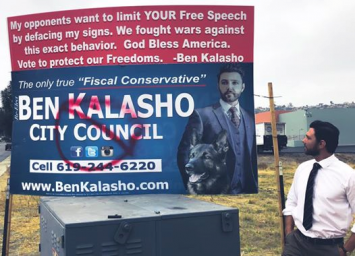 October 6, 2018 (El Cajon) – Councilman Ben Kalasho claims that 53 of his signs have been defaced, alternately blaming his Republican opponent and left-wing Marxists and fascists.

“That’s over $5,000 in damage by my opponent,” he claims in a video on Facebook.  Later he states, “It’s sad that we live in a time when Marxists and fascists are taking over our American values…We will not allow these terrorists to interfere with our elections.”

Kalasho’s opponent, Councilman Gary Kendrick, has denied that his campaign has defaced any Kalasho signs.

Kendrick has held office for 20 years and has not been accused of sign-tampering in any of his prior campaigns. (Kalasho, a former Republican and former Democrat, currently belongs to no political party.)

Kalasho’s video states, “I’ve never seen anything like this.”

But in fact, he has—in all three of his prior races.

In 2016, as ECM reported, Kalasho claimed to have had 62 campaign signs stolen or defaced.  He even posted surveillance video showing two purported thieves, whom he said he reported to police.  Back then, Kalasho said he believed he was targeted by Middle Eastern resident who opposed his stance on limiting the influx of refugees into El Cajon.

In his 2012 unsuccessful run for Council, Kalasho accused a campaign worker for his opponent, Bill Wells, of stealing his campaign signs, including one replaced by a large sign that stated, “Only Lincoln Club endorsed candidates can post signs here” and another that backed Wells and Tony Ambrose, another Council candidate. Kalasho campaign workers did back part of his claim, stating they saw signs being stolen, as ECM reported.

Back in 2010 when Kalasho lived in Santee and ran for the Santee City Council, his campaign sign was reportedly marked with racist graffiti. Jimmy Greene told CBS news that Kalasho’s sign was defaced with the words “The Arab Leader Santee Needs” added. Green told CBS 8 he reported the damage to Kalasho, adding, “When he called me before he came over he said, `The funny thing is, I’m Polish.’”  In fact, Kalasho is an Iraqi immigrant of Chaldean descent.

While it’s unclear just who defaced Kalasho’s campaign signs in this election, there is no evidence of involvement by Kendrick.

What is clear is that there has been a long history of his signs being damaged or stolen in various races, each against different opponents in two separate cities.

A list of possible suspects might read like the cast of a "Whodunnit" novel. Many people have animosity toward Kalasho, who has a long string of ethical and legal challenges, numerous civil lawsuits against him including a pending sexual harassment and cyber-harassment suit with  plaintiffs including beauty pageant contestants, a lawyer and a taco shop owner. He's also pled guilty to worker’s compensation fraud, had a guilty verdict by a jury in another fraud case, had three police incident reports filed against him by people alleging he threatened assault with an attack dog and/or stalked them, had a bogus charity he ran shut down by the state, unsuccessfully sued the city of El Cajon claiming discrimination, and more. Recent Council meetnigs have been packed with residents holding signs calling on Kalasho to resign.  Read details here. At least two websites dedicated to exposing Kalasho's antics have popped up online:  Transparent East County and the Ben Kalasho Free Speech Clown Appreciation Project.

Defacing or stealing campaign signs is, of course, a crime, regardless of the character or record of the candidate.

Kalasho has responded to the defacement of signs in this race by adding a new red addition to the tops. It reads, “My opponents want to limit YOUR free Speech by defacing my signs. We fought wars against this exact behavior. God Bless America. Vote to protect our freedoms.”

We know Kalaso is a liar as to date he has been caught in so many lies it's hard to keep count. That considered, it is far more likely he damaged his own signs in his latest attempt to employ the liberal tactic of claiming victimhood. Of course, one could always believe this discredited liar's latest story that someone vandalized 53 of his signs, all posted in highly visible public places even though there is not a single witness to these unlawful actions, not even one. The citizens of El Cajon anxiously await the day this city-wide embarrassment finally faces the punishment he so richly deserves.