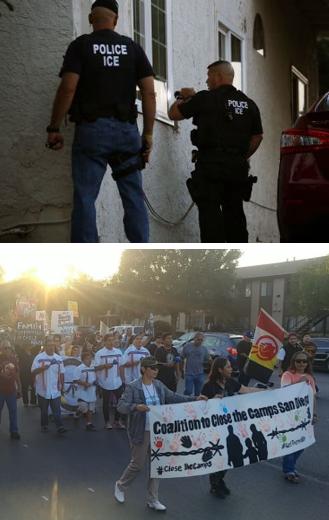 Do you know your rights if ICE comes to your door?

July 14, 2019 (San Diego) – As part of immigration sweeps across the nation this week, 20 people with final deportation orders were arrested this past week in San Diego County, before the announced date of sweeps that President Donald Trump said would begin Sunday, Immigration and Customs Enforcement has announced.

According to ICE, 85 percent of those arrested had criminal convictions or criminal charges pending that included drug and weapons offenses, hit and run, driving under the influence, theft, domestic violence, fraud, or evading law enforcement.

The other 15 percent had only immigration violations, but all will be processed for deportation.

Across the nation, President Trump’s announcement of the impending sweeps struck fear into immigrant communities, raising fears of family separations and sending some immigrant households into hiding, NPR reports.

Fear, even among legal immigrants or those with family members who are undocumented, has prompted a "Know Your Rights" campaign by civil liberties and immigrant rights groups.