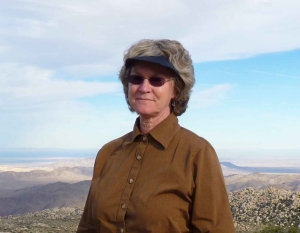 July 9, 2020 (Boulevard, CA) – A federal lawsuit has been filed against the U.S. Bureau of Indian Affairs (BIA), the U.S. Department of Interior and agency officials challenging their approval of  Campo Wind facilities on tribal land, including 60 wind turbines each 586 feet tall on 2,200 acres, as well as Boulder Brush energy facilities on adjacent private land.

“The project is a dangerous and completely unnecessary industrialization of high-quality wildlife habitat in an area with an extremely high wildfire risk and frequent low-flying military, commercial and private aircraft,” states the suit filed by the nonprofit Backcountry Against Dumps along with Boulevard residents Donna and Ed Tisdale, whose ranch adjoins the project site with a half-mile shared border.

Dangers to aviation can occur because lights on turbine towers are “hundreds of feet below blade tips” which sweep up into the sky, the suit states.Donna Tisdale is also chair of the Boulevard Community Planning Group, which has long fielded complaints from residents over existing wind projects in the area.

The suit further argues that the project will cause significant environmental harms to tribal members and the surrounding community, which the BIA failed to address and that the BIA violated federal environmental protection laws. The suit also accuses the BIA and Interior Department of failing to abide by environmental  laws including laws protecting eagles and migratory birds from being killed by the 230-foot-long, 40 ton blades spinning at 200 miles per hour.

The suit contends that the project’s ridgetop turbines and power lines poses a severe fire danger to backcountry residents and will impede aerial firefighting ability, also posing aviation hazards, risks and property devaluation for neighbors.. Problems include sleep deprivation due to noise and infrasound, blade flicker, and potential “extreme safety hazards to homes, cars and people” if massive blades are hurled off turbines, as has already occurred at turbines on other local wind projects.

Photo, right: Wind turbine fire at an earlier wind energy project on the Campo reservation. The new project would have more than twice as many turbines, each much larger than the earlier project which generated significant complaints among neighbors that remain largely unresolved. 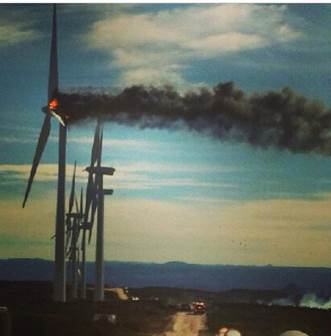 n May 12, the BIA published notice of approval of a 25-year-lease, with a possible 13-year extension, between the Campo Band of Digueño Mission Indians and Terra-Gen Company.

Terra-Gen and tribal leaders have contended the project is needed to produce clean energy and revenues for the tribe, though the suit notes that wind projects frequently fail to produce only about 30 percent of the turbines' rated capacity due to uncertain winds and frequent breakdowns.

As ECM previously reported,  a majority of  the Campo tribe’s voting members signed a petition asking for a vote to overturn the tribe’s earlier approval after learning more about the project’s risks to tribal members, but the Chair reportedly declined to recognize a motion and also reportedly failed to allow a vote on a petition to remove him from office. The BIA has failed to respond to correspondence from a tribal member alleging violations of tribal laws governing elections.

People who wish to donate to help support the legal challenge can mail a check to Backcountry Against Dumps, P.O. Box 1275, Boulevard, CA 91905 or click here to make an online donation.