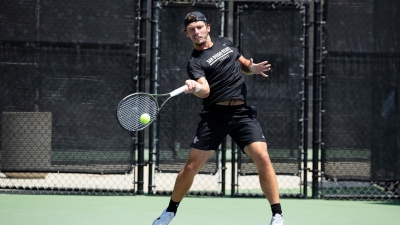 April 21, 2022 (Boise) - Alexander Mandma broke a 3-3 tie to give the San Diego State men’s tennis team a 4-3 victory over the Boise State Broncos in a Mountain West Conference matchup at the Boas Indoor Tennis Center on Thursday.

The win, the Aztecs’ second in a row, improves the team's conference record to 3-2 and 7-10 overall with one regular season dual remaining on the schedule, Saturday at Nevada. Boise State falls to 13-10, 2-4 in league contests.

The score was tied 3-3 with Mandma and Broncos’ Caden Moortgat having split the first two sets in their match. Moortgat won the first set 7-6 (5) and Mandma returned the favor by the same score in the second to set up the decisive third set. Mandma, a freshman out of Talinn, Estonia, steam rolled Moortgat in the third 6-1 to secure the team victory. The win is Mandma’s fifth at the No. 4 position and his 11th overall this season. It levels his Mountain West record at 2-2 and snapped a four-match singles skid.

The Broncos took an early 1-0 lead on the heels of a pair of 6-4 victories in doubles. Joe Tyler and Victor Castro as well as Johannes Seeman and Roni Rikkonen fell victim to Simon Arca Costas and Caden Moortgat, and Jan Lucca Marquart and Ryo Minakata, respectively. Judson Blair and Mandma trailed 5-3 when the doubles point was secured by Boise State.

Seeman quickly evened the match at 1-1 with a 6-2, 6-4 win over Arca Costas at No. 2 singles. It is his 10th singles win of the year and improves the Parnu, Estonia native’s MW record to 3-1 this season.

The Broncos moved back in front with a win at the No. 6 position. Jules Auffray, who was competing at the position for the first time this season, was bested by James Van Herzeele 6-2, 6-1.

Castro leveled things for the second time on the day with a straight sets win over Marquart. The 6-2, 6-4 victory was Castro’s fifth this year at No. 3, evened his Mountain West record to 2-2 and is his second win in a row.

Tyler gave San Diego State its first lead of the day, 3-2, with a 6-3, 6-4 win against Boise State’s Pedro Liborio. It is his third straight singles win, 10th in dual matches this year, improves his conference record to 3-1, and gives him his team leading 16th overall singles win for the campaign.

The Broncos tied it at 3-3 with a three-set win over Judson Blair at the No. 5 position. Blair entered the day’s competition as the team’s hottest player, having won his last three singles matches, but after taking the opening set 7-6 (5), he came out on the wrong end of 6-2 and 6-1 scores in the second and third sets, respectively.

That result set the stage for Mandma’s heroics and the team win.