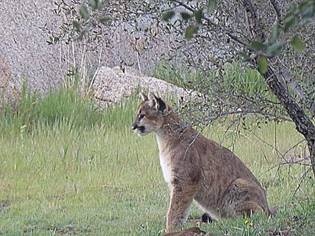 Photos by Allen Doran, near Carveacre

March 11, 2021 (Alpine) – Three weeks after a suspected mountain lion attack killed 10 sheep and goats on Peutz Valley Road in Alpine, residents of Carveacre in the Japatul/Alpine area report more livestock killings that they believe were the result of a mountain lion and at least one cub.

“A friend had her herd of goats attacked,” Jennifer Rain Miller posted on Facebook.  She indicated that the attack occurred on March 9 just before 4 p.m.  “Many are completely gone missing and the vet confirmed the survivors’ wounds were consistent from one or a few mountain lions.” She added that her friend was home, adding, “Be aware the cats are still hunting in this area and there are more than one.”

Other neighbors reporting seeing numerous lion tracks in the Carveacre area. Some speculated that perhaps a mother lion was teaching one or more young lions to hunt.

Kay Duran says she and her husband, Allen, saw a mother and young lion hunting 150 feet outside their bedroom window on Feb. 26 around 4:30 p.m. at their home near Carveacre. They do not own any livestock and believe the animals were hunting rabbits.  "When Allen went out the following morning, the mom started walking off when she heard him. The cub stood and checked Allen out for awhile, then turned tail, following mom," she adds. "We haven't seen them since."

A resident on a Descanso neighbors forum posted that she, too, lost a herd of goats a few months ago that she believes was due to a mountain lion attack. 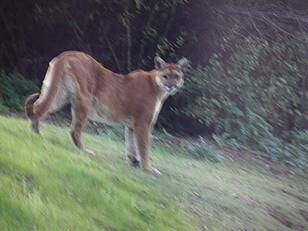 Mountain lions’ preferred prey is deer, though they are known to attack livestock or pets at times.  It is illegal to shoot or kill a mountain lion in California unless a depredation permit is obtained. However, there are ways to protect livestock from lions.

The Mountain Lion Foundation offers tips to protect your livestock and pets at this page, including: