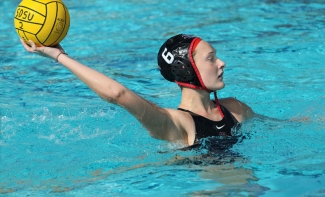 SDSU got on the scoreboard 2 minutes, 3 seconds into the game with a goal by Maddy Parenteau. Cal, however, scored the next eight goals of the contest, including five in the first quarter and three in the second, to open up an 8-1 lead at the half.

San Diego State answered just 23 seconds into the third quarter with a goal by Shelby Kraft before the Bears scored three straight to take a 11-2 lead.  Casia Morrison scored the Aztecs’ third goal with 3:14 left in the third, but back-to-back goals by Cal stretched its lead to 10 at 13-3 with 1:38 left in the third. The two teams traded goals over the final 32 seconds with Kraft netting her second of the game for SDSU and Georgia Bogle scoring for California with two seconds remaining in the quarter.

San Diego State closed strong, outscoring the Bears, 3-1, over the final quarter with a pair of goals by Hannah Carrillo and another by Lizzy Bilz to make the final 15-7.

Carrillo and Kraft led the Aztecs with two goals apiece, while Kitty Lynn Joustra tallied four goals for the Bears.

The Aztecs saw their two-game winning streak snapped. SDSU has won two straight contests on four different occasions this season, but has yet to win three consecutive games.

San Diego State is off until next Thursday (April 5) when it plays host to Cal Baptist. First sprint at Aztec Aquaplex is 4 p.m.