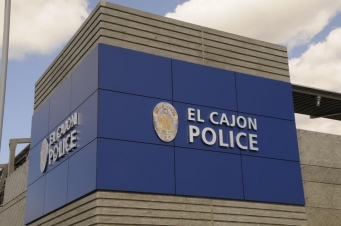 Update Jan. 11: El Cajon police announced the arrest of suspect David Francis Cepeda Pangilinan by the Los Angeles Rampart Narcotics Detail.
Update Dec. 18:  The officer has been released from the hospital and is expected to make a full recovery.
Update Dec. 14, 2020 10 p.m.:  The investigation by El Cajon Police has identified a suspect who is being sought for questioning:  David Francis Cepeda Pangilinan, from Guam is 5 feet, 6 inches tall and weighs 200 pounds, with brown hair and brown eyes.

By Miriam Raftery
December 14, 2020 (El Cajon) – An El Cajon Police officer is hospitalized in a trauma center in critical but stable condition due to serious injuries sustained at 8:30 a.m. during a traffic stop of a rented black Volkswagen SUV, CA license plate 8LC117.