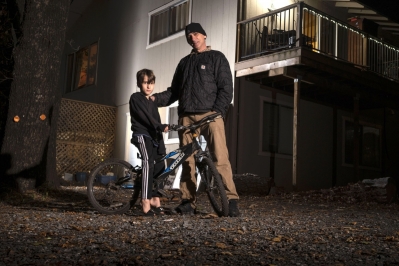 Photo:  Jacques Gene at his home in Cool, near Sacramento, with his 7-year-old son Wyatt. They are among the hundreds of thousands of Californians who are bracing for pandemic aid to end, as federal unemployment benefits expire and the state lifts its eviction moratorium. Photo by Hector Amezcua for CalMatters

The construction foreman in Cool, east of Sacramento, was inside a half-finished home when the rolling trusses that make up the underside of the roof fell, collapsing the whole house. Gene, 46, suffered broken ribs, a punctured lung and a concussion. When his coworkers sorted through the rubble, he says, they didn’t expect to find him alive.