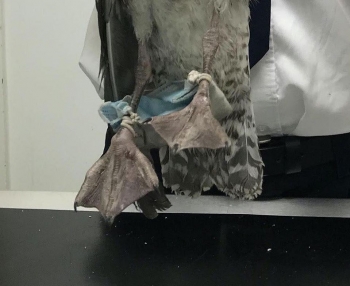 By Miriam Raftery
Photo via Royal Society for the Prevention of Cruelty to Animals
A wildlife rescue nonprofit is asking people around the world to cut straps on masks before throwing them away, after rescuing hundreds of animals and birds that became entangled in elastic bands on masks used during the COVID-19 pandemic.
People for the Ethical Treatment of Animals (PETA) director Eilsa Allen says, “Birds have died after become entangled in face masks, while dolphins, turtles and other marine animals can easily choke or suffer from fatal bowel obstructions when they mistake PPE [personal protective equipment] for food,” Yahoo News reports.

September 29, 2014 (Ramona) - PETA, or People for the Ethical Treatment of Animals, is offering a $2,000 reward to anyone with information about a man who threw a 6 month-old puppy over a fence in Ramona. The brutal act was caught on video on August 28th, showing a man in a red shirt and dark pants committing the violent act. The video went viral, drawing over 7,000 viewers on Facebook, but the crime remains unsolved.