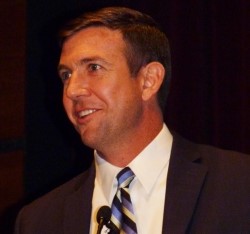 February 14, 2018 (Jamul) — The media has revealed new details on the F.B.I. investigation of an East County lawmaker, as well as his alleged behavior in Washington D.C. According to reports, the investigation is intensifying, as Representative Duncan Hunter’s parents and a female lobbyist have been subpoenaed in the improper spending probe. Fellow Republicans are reportedly worried about his election prospects.

Politico reported Thursday that Margaret Hunter, the Congressman’s wife, is the focus of the investigation into whether campaign funds were used for personal expenses, including tuition payments for their children’s private school and expensive dining where no donor appeared to be present. She allegedly used a campaign credit card for shopping, fast food and surf shops. Still, sources for the stories cautioned against just blaming the Congressman’s legal troubles on his wife.

The most salacious details in the report allege that Hunter has spent his time in Washington womanizing and drinking on the job. Hunter has slammed the look into his personal life including suggestions that he had a mistress as “tabloid trash” and Washington gossip, the San Diego Union-Tribune reports.

While Politico does not name sources for the mistress allegations which have not been independently verified, the publication is no tabloid; Politico has won major journalism prizes and its reporters are regularly guests on TV news programs on major networks including CNN and Fox.

Politico interviewed multiple staffers in Hunter’s office, who say a woman currently being interviewed by the F.B.I. was promoted, while frequently missing work and creating a toxic work environment. She sometimes went with him to the Capitol Hill Club, a bar frequented by Republicans. The unidentified woman’s relationship with the Congressman made fellow staffers question his judgment.

His drinking habits were noticed as soon as he entered Congress, and he has a reputation of partying. In 2014, Washingtonian magazine named Hunter the top “party animal” in the House of Representatives  on its “Best and Worst” of Congress listing, based on a survey of Congressional staffers, as ECM reported.

Even earlier, House Speaker John Boehner asked certain House members to refrain from partying with lady lobbyists, Salon reported in 2010. The article cited the New York Post and reported that lobbyist Glenn LeMunyon, a former staffer for disgraced Congressman Tom DeLay, had been hosting after-hours house parties at his home for female lobbyists to socialize with legislators including Congressman Duncan D. Hunter, who ran on a family values platform for the seat representing parts of San Diego and East County.

According to the new report by Politico, confidantes have recommended he check into treatment for alcoholism or get checked out for Post-Traumatic Stress Disorder or PTSD; Hunter is a combat veteran who served in Iraq and Afghanistan.  But Hunter maintains that each time he goes out, he is working. The Politico investigation details a December incident among Republicans in the Armed Services Committee, Hunter raised his voice at Speaker Paul Ryan. However, members noticed his bloodshot eyes and slurred speech, and questioned whether he was drinking on the job.

According to Politico, the two-year funds scandal has already changed the family’s circumstances. Hunter hired an auditor and paid back his campaign $60,000. He sold his house, and his wife and kids moved into his parents’ home. Hunter spends most of his time in his Washington D.C. residence. Duncan Hunter Sr., the former representative of the district, moved to a second property in Texas.

Hunter says he will run for reelection, but his fundraising efforts are dismal— with the bulk of his donations funneled into growing legal fees. The cost of the F.B.I. investigation has already driven him into debt. Hunter has until March ninth to file to run again.

Hunter’s office has not responded to a request for comment from East County Magazine for this article.