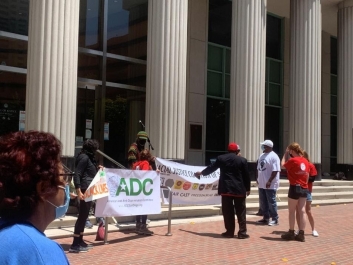 The Racial Justice Coalition held a rally in front of the Hall of Justice in Downtown San Diego as part of its campaign to demand that District Attorney Summer Stephan resign immediately. The coalition faults Stephan for not prosecuting many cases of law enforcement officers shooting unarmed people.

This was coupled with a pro-Palestine event that took place down the street the same day, organized by the Palestinian Youth Movement and a collaborative of other organizations, many of whom overlapped with the Racial Justice Coalition’s mission for minority rights.

RJCSD was joined by leaders from several other community organizations, who spoke on experiences from their organizations about issues with law enforcement and how the court system has marginalized minorities both criminally and civilly.

Curtis Howard, Chairman of All of Us or None is a former gang member and gang activist who spoke at the rally.

“One of the things that is so distasteful about what’s going on now is the fact that when I was brought to prison…when I was held to be processed in the criminal justice system for the crimes I committed I was taken there by the police, by the same people who are now not being held responsible for the crimes THEY commit,” said Howard.

Howard also stated that the San Diego Police Department operates like he did while he was a gang member in the way that they communicate with citizens and how some officers attack an individual together and stand up for the wrongdoings of their fellow police officers.

Brandy from the Black Panther Party of San Diego recommends that people establish and define their own communities and protect each other. 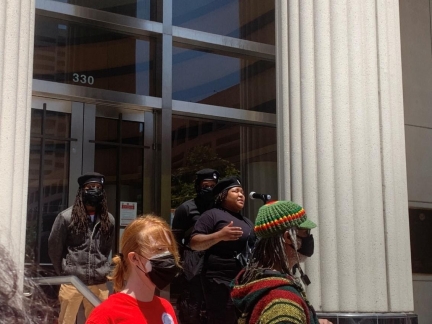 This rally was the first of an ongoing process to remove Stephan from office. Organizers recommended writing to state legislators to start a paper trail.

ECM reached out to the District Attorney’s press contact before publishing our previous article and again while reporting on this event.

Update: On June 6, ECM received this response from Tanya Sierra, public affairs officer for the DA. "Officer-involved shooting reviews conducted by the District Attorney's Office are independent, objective and thorough. Everyone is accountable under the law and When the evidence and facts support criminal charges in a use of force incident, we file them, as we did last summer against a former Sheriff's deputy charged with murder. The DA's office has also charged police officers in cases of excessive force and police misconduct, as we did against a La Mesa police officer recently."

Stephan charged the former Sheriff's deputy with murder after he shot a suspect who was fleeing the downtown jail. The former LMPD officer, Matt Dages, is charged with falsifying a report in the controversial arrest of Amaurie Johnson, a young black man, at a trolley stop. No charges were filed against Johnson after video footage failed to substantiate Dages' claim that Johnson had assaulted him.

Summer Stephan, as she was hand picked by Bonnie Dumanis who was part of the old boys network which is and always will be about protecting their own... she has to go!