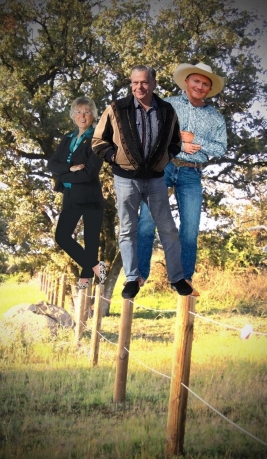 March 7, 2021 (Alpine) - For decades, Wright’s Field in Alpine has been a target for development.  Because of its rich natural resources and quality and diversity of plant and animal life, the land has long been protected from turning into a housing development, golf course, high school and an active sports park.  But now a controversial proposal would allow a $28 million, 26-acre sports complex to be built adjacent to land preserved by the Back County Land Trust. (BCLT)

Passionate residents Dave and Yolaine Stout, through the Backcountry Land Trust (BCLT), were able to protect 230 acres of Wright’s Field. Their ultimate goal was to purchase the remaining parcel adjacent to it, which they referred to as Phase III of Wright’s Field.

The owner of Phase III, Apollo Growth Group Ltd., had tried to develop this land, but because of a number of reasons, including its biological sensitivity, it remained untouched.

Barnett mentioned available active park locations that the County had found, one with a willing seller but Supervisor Jacob decided to stop all County work on active parkland development for Alpine “until the ACPG gets its act together.”

The County of San Diego has since changed its opinion about an active park on Wright’s Field – and did so quietly and methodically – under the radar of a community passionate about its rural heritage and open grassland.

On Dec. 22, 2017, journalist Karen Pearlman of the San Diego Union Tribune wrote that Parks and Recreation Chief Jill Bankston said. “The department in the fall identified a parcel that may be suitable for a new park in Alpine…we are working with the property owner to gauge his interest in working with us,” she wrote. “This site may be able to accommodate both active and passive recreation.”

There was no mention of Wright’s Field in the article.

Barnett, whose ultimate goal has always been “to get a large county-owned sports park for Alpine,” is also a board member of the BCLT in charge of land acquisition. It was his job to acquire Phase III of Wright’s Field, the same parcel the County targeted for a sports park. The same parcel that the County said wasn’t “suitable for the development of an active recreation park.”

The day before the Union Tribune article came out, Wright’s Field Partnership LLC was created in Dallas, Texas.

Based on this timeline, the County had apparently been negotiating the purchase of Phase IV of Wright’s Field with Apollo Growth Group Ltd. prior to the LLC being created in Dallas, Texas.

Almost a year later, the County of San Diego recorded an option to purchase this parcel from Wright’s Field Partnership LLC.

On February 27, 2019, the County of San Diego submitted a Land Use Agenda Item to the board of supervisors.  It stated that the County intends to build an active park on this site and “seek to enter into a maintenance agreement with a partner organization using a partner

evaluation model to operate and maintain the portions of the land that will be preserved.”

Based on this information, it is no surprise that Barnett would be supportive of this transaction. His top priority of getting a County Sports Park is now checked off his political to- do list and he partners with the BCLT to maintain the leftover passive land. It’s a win/win for Barnett.

Prior to the vote, in a 10 News interview with Jerod Aarons, Jacobs said, “We add to Wright’s Field, we add to the open space amenities, in the community, and at the same time, we have enough property to have active recreational opportunities for children, families in the community.”

Initially, residents were told that the County Alpine Park would be between 10 and 15 acres, which made sense and was accepted by many residents. However, it almost doubled in scope once the land was purchased.

In the County’s Frequently Asked Questions: Alpine County Park it states that “Early conversations about the search for a park in Alpine may have referenced smaller acreage, however, the purchase of the 98-acre parcel made it possible to expand acreage opportunities for both active and passive use.”

While there are residents in Alpine who would welcome the recreational opportunities in an active sports park, such as baseball, basketball and skateboarding, such activities could occur in a different location, not necessarily an environmentally sensitive site that many in Alpine have long fought to protect.

The proposed park is located on South Grade Road, which is one of the most dangerous roads in Alpine. Multiple people have died on this road and recently, a 19-year-old was a victim of a hit and run accident.

The County’s response to multiple parks was “Putting park amenities in a single area is more cost-effective and centralizes resources for better maintenance over time.”

Barnett promotes this park without analyzing traffic safety, wildfire risk and where they would obtain the water source for the playing fields and landscaping. 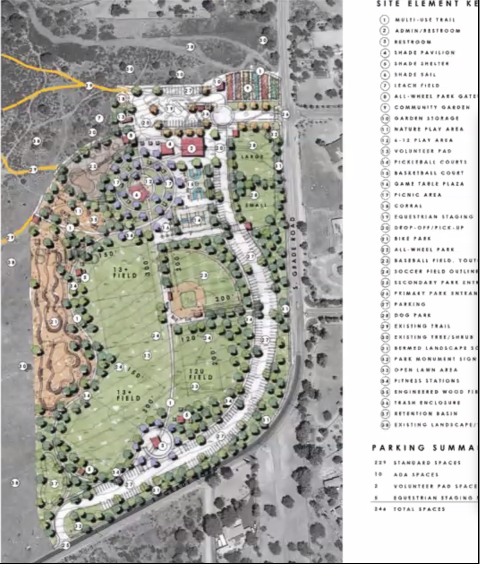 Unfortunately, most residents never knew or read the County letter stating they wanted to build an active park on it.

It wasn’t until 2021 that the County posted a link to it on their website under “Frequently Asked Questions: Alpine County Park.”

Alpine residents were unaware that the community meetings, which occurred after the County decided to build an active park on Phase III of Wright’s Field, were held in compliance of Policy I-44. “The Department of Parks and Recreation, in conjunction with the designated community advisory group…shall hold a minimum of two community workshops regarding the proposed park design project in the affected community.”

There is no mention in this policy that the County has to listen or put in effect what the community wants.

The County just has to hold two meetings to be in compliance of Policy I-44.

On September 23, 2020 residents got their first glimpse of the proposed Alpine Park during the county’s virtual all-wheels community meeting. It was then that residents learned that this park was not what they expected. The County presented a 26-acre sports complex complete with baseball field, soccer field, basketball courts, pickleball courts, skateboard and bike park, a pad for a volunteer to live and 270 parking spaces.

When Barnett was asked why the BCLT hadn’t purchased Phase III when it was offered for sale to them in 2013, he said that he couldn’t secure government funding.

There is no record of public outreach to secure private funding for the purchase, or which federal grants he tried to secure.

Barnett also said that “in early 2019 rumors circulated that the property had been sold,” and “about that time the County advised the public that the closing on a large property for an Alpine community park was imminent.”

Barnett has been on the ACPG’s Trails and Parks Subcommittee and has worked closely with the County and former Supervisor Jacob for over 15 years.  While Barnett has not stated precisely when he learned of this plan, his state top priority has long been to get a “County sports park” and it seems unlikely that Supervisor Jacob would have made a decision to back the project without Barnett’s knowledge or approval.

Once residents were made aware of the expansiveness of the park, many expressed their outrage at the prospect of a sports park rather than a passive park that preserves the natural environment.

A group of people united under the name of “Preserve Alpine’s Heritage.” They met virtually with the County to encourage the County to downsize its proposed sports park into a smaller, nature-based park.  They have yet to change their plans.

At present there are almost 500 members of the Preserve Alpine’s Heritage Facebook page.

They envision “a small, nature-based park next to Wright’s Field Preserve that respects and complements the open spaces and outdoor recreation offered by this irreplaceable natural resource already enjoyed by so many.”

They also feel there should be smaller parks closer to town and to refurbish the existing sports fields that are in disrepair.

As the Preserve Alpine’s Heritage grew and became vocal in the community, the BCLT asked for both of these board members to resign. When Pat Williams wouldn’t resign, they voted him off the board.

Travis Lyon, like Barnett, is pro sports complex and is also on the BCLT and the ACPG. They remain steadfast in their support of a sports park on Wright’s Field. Two out of the five BCLT board members are active proponents for the development of the sports park.

However, the BCLT states it “has not taken any official position on the proposed Alpine Park.” Their website goes on to state “Any public sentiment from BCLT Directors/Personnel are solely their personal positions, not those of the board as a whole.”

During the January 2021 ACPG virtual meeting, Barnett replied to residents concerned about the sports park’s impact, “I’m comfortable with that personally… Um, I’m sure it’s just not going to just damage the whole rest of the 380 acres.”

Ultimately, the ACPG decided to justifiably wait for the environmental impact report and traffic analysis to vote on whether as a group they support an active park on Wright’s Field.

Meanwhile, public outcry is expanding in the Alpine community.

A letter on behalf of the board of the Greater Alpine Fire Safe Council has been published in the Alpine Sun and a petition on Change.Org has been posted. In less than a week there have been over 350 signatures of people who have serious questions about the placement of an active park on Wright’s Field.

A website has been developed by Preserve Alpine’s Heritage to keep the public informed and force the County to be transparent.

Supporters of both the Back Country Land Trust and former Supervisor Dianne Jacob find it disappointing that they would barter the grasslands for what appears to be political gain.

With Jacob gone due to term limits, any efforts by constituents seeking to have the active park moved elsewhere would need to persuade Jacob’s replacement, newly elected Supervisor Joel Anderson.

If you are against the proposed park as it is presently designed, please make your voice heard. Write letters, make phone calls, sign the petition and get involved.

Once this land is gone, it is gone forever.

happened when santee wanted a park in towncenter. now it is so busy it is hard to get to the place. why does everyone complain "not in my backyard" after they get theirs? do they even realize they would not be here if everyone stopped all development? want to stop growth? stop having kids!