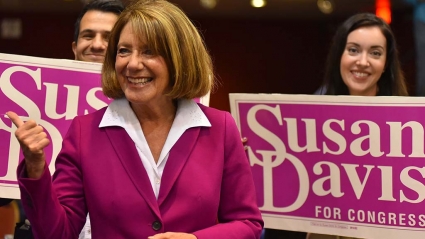 Davis, a senior member of the committee, added language to this year’s National Defense Authorization Act to create a basic needs allowance to bridge the gap for eligible service members who are currently not eligible for Supplemental Nutrition Assistance Program (SNAP) benefits.

“Of all the sacrifices our military families make, putting food on the table should not be one of them,” Davis said. “No child should go hungry, let alone the children of our service members.  Creating a basic needs allowance is a simple solution to the critical issue of food insecurity among some military families.”

“We should be able to meet the basic needs of our military families,” Davis said. “Military families go where they are ordered and sometimes that means moving to areas with a higher cost of living. Add to these situations where a spouse might have trouble finding new employment and this becomes a recipe for food insecurity.”

The following provisions were included by Davis in the base language of the NDAA or passed as an amendment in committee:

Support for Women in the Afghanistan Security Forces – Davis included a provision to set a goal of using $29.1 million to support the efforts of the Government of Afghanistan to promote the recruitment, training, integration, and retention of Afghan women into the Afghan National Defense and Security Forces.

This represents a key step to assure that peace and security processes do not overlook the inclusion of women, a critical strategy that research has shown reduces conflict.  Davis has made numerous trips to Afghanistan in support of the troops, also meeting with Afghan women serving in their country’s defense forces and with women political and community leaders. A key to the success of the mission in Afghanistan is the ability of women to contribute to its growth and security.

Grieving the Loss of a Child – This Davis Amendment changes current leave policy for service members so their pre-approved parental leave is not terminated in the tragic event of a child’s death. This will ensure all military members have time to grieve after losing a child.

Absentee Ballots – The Committee approved an amendment offered by Davis to allow military and overseas voters to track and confirm the receipt of their ballots. Those fighting to defend our freedoms and democracy deserve to know their votes have been counted.

“Dangerous” Dogs – Establishes a standardized policy applicable across all military communities for the regulation of certain breeds of dogs. Some servicemembers, who are regularly transferred to different duty stations, are prevented from taking their dogs with them because of bans on breeds of dogs deemed to be dangerous in different areas.

Strengthening Oversight of Policies to Prevent Sexual Assault – This provision will require the Department of Defense to brief defense committees on the effectiveness of the 2019 military justice overhaul and provide recommendations for further improvement of the military justice system. Judge Advocates General of each Armed Service must brief congressional defense committees on the services’ progress in establishing the Special Victims Counsel Programs, as well as the new separation polices for the victims and accused.

I apologize that I had no idea this was happening to local military families. American Exceptionalism, I guess. Good on Rep. Davis, but it is shocking that hunger among the families of those who serve is a problem we have to fix. Shameful.