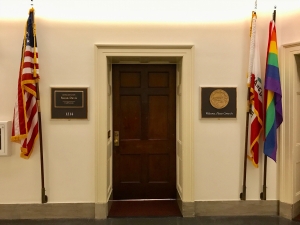 March 30, 2018 (San Diego) – A federal judge has dismissed a lawsuit filed against several members of Congress, including Susan Davis (D-San Diego) for displaying a rainbow gay pride flag outside her offices.  U.S. District Judge Randolph Moss rejected arguments by the plaintiff, Chris Sevier, who had argued that displaying the flag amounted to establishment of a religion and thus violated the establishment clause of the constitution.