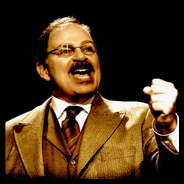 October 11, 2020 (San Diego) - 2020 is a history making year, one historians will be documenting for years. But as much as times change, they stay the same. Almost a hundred and twenty years ago Teddy Roosevelt faced the same struggles we are facing today including bullying, racism and riots.

The Roustabouts Theatre Company, fairly new to the San Diego theatre community, has moved into digital media like some of the others in town. From October 10 - November 2, 2020. they are streaming Roosevelt: Charge The Bear.  A new one man play by Phil Johnson & Marni Freedman, starring Phil Johnson.

With a compelling, storytelling plot, phenomenal actor Phil Johnson has you believing you are in the room with Theodore Roosevelt himself, glued to each word, as he tells his story. The plot is the story of the new President Roosevelt, as he takes over from President William McKinley,.after McKinley’s assassination.