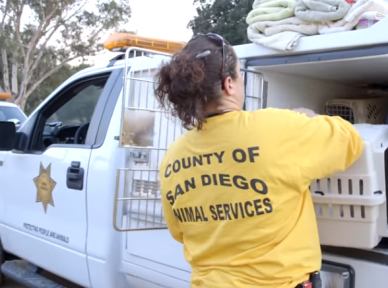 July 25, 2017 (Ramona) -- A public meeting about the County’s possible outsourcing of animal welfare services in unincorporated areas drew criticism last week from union members and some residents in this town, where memories of evacuating horses and other animals during the Witch Creek and Cedar wildfires are still scorched deeply into local culture.

“We have a lot of animals here. We need Animal Services,” said one woman, interrupting the facilitator, a consultant, at the beginning of the meeting. “Why the short notice?” others loudly demanded.

The County gave media and the public one or two days to get the word out for the July 19 event at Ramona Public Library, the only meeting planned in East County. “That was unintentional,” said consultant John Gavares. “It was a glitch.” He said he didn’t have any more information about that. As outbursts continued, Gavares asked for respect. “We want to be respected too,” said a woman in the audience.

However Supervisors heard a presentation on outsourcing Animal Services back in March, making it unclear why longer notice could not have been provided to the public of public meetings on the issue.

The Board of Supervisors in March voted to investigate outsourcing of labor currently done by 128 full time employees as a way to deal with increased personnel costs, costs of facilities not included in service agreements, and the public’s request for increased operation hours. Animal Services and its animal control officers currently serve the cities of San Diego, Carlsbad, Encinitas, Solana Beach, Del Mar and Santee, in addition to unincorporated areas, providing shelters, pound services, licensing, adoption, microchipping, injured animal rescue, enforcement of laws regarding dangerous animals, and permitting for animal related businesses.

In May, the County notified contracting cities that their agreements will not be renewed after they expire June 30, 2018.

Animal Services Deputy Director Laurie Joniaux told attendees that they are just exploring the possibility of outsourcing, no decision has been made yet, but they want to learn the level of service expectations from residents in the unincorporated areas.

“The county felt this would be a good opportunity to explore the possibility of outsourcing these services for possibly more economical and more efficiency in the unincorporated areas,” she said.

Her department’s budget has risen 20 percent since 2013-14, to just under $19 million for 2017-18, according to a staff presentation to the Board in March. Residents in the city of San Diego, in 2016, made roughly 60 percent of the requests for help, using up the same amount of the budget. Staff levels would be “reduced as appropriate” if outsourcing goes ahead, according to the staff analysis. It’s anticipated that some cities, such as those previously served by the County, will obtain their own private service contracts.  San Diego Humane Society is the only entity that has responded to the County as both qualified and interested in any possible outsourcing.

The Ramona meeting included County staff such as the head of the Communications Office, Michael Workman, along with Sheriff’s deputies, union employees, animal-related volunteers and a small number of Ramona residents, who brought the total to about 50 people. 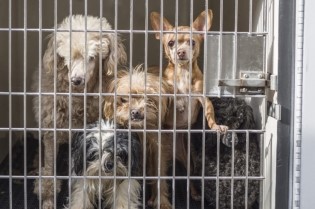 Service Employees International Union Local 221 (SEIU 221) has brought a charge of unfair practices against the County, stating in a handout passed out at the meeting that it will “exercise its right to utilize the managed competition process to develop an independent proposal as an alternative to contracting out.” It further stated, “The union is calling upon the County to follow its own process, which means full disclosure and transparency of all relevant information and working collaboratively to develop a proposal that will build on the experience of long-term employees to keep residents and animals safe and provide value to taxpayers.” The union declared the hiring of a consultant “a waste of taxpayer dollars.”

According to the SEIU Lcoal 221 unfair practices charge on its web site (http://www.seiu221.org/files/2017/07/170713Charge-against-County-of-San-Diego-regarding-Animal-Control.pdf), “On March 29, 2017, the Union notified the County that it had failed to provide notice to the Union of this proposal prior to the Board of Supervisors’ meeting. The Union demanded that the County cease and desist any action regarding subcontracting Animal Control Services until such time as the Union and County can negotiate over the matter.” According to the charge, the County notified the union in a letter that the demand to bargain over the initiative was “premature.”

“We haven’t even decided yet if we’re going to outsource,” Workman told East County Magazine after the meeting. “We’re just looking at the idea.”

Union representative Allyson Presskreischer, when asked after the meeting for a comment regarding the short notice, said, “They don’t want input.” 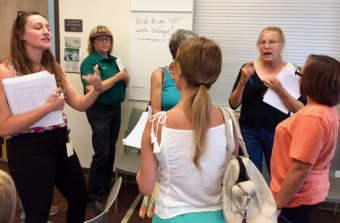 Photo, left: Allyson Presskreischer of SEIU Local 221 discussed Animal Services with others during a break-out session at a County public meeting in Ramona, July 19.

Gavares said the meeting was designed solely to get input on what is working well and what is not working in the way services are currently delivered. He handed out assessment forms and asked the audience to “quickly and quietly” break into break-out sessions to discuss their ideas and then report back to the group. At least twice during the meeting, he appealed to the audience to avoid any “emotionalism.”

When the groups reported out, they asked for:

One woman raised the issue of Assembly Bill AB1250, (https://leginfo.legislature.ca.gov/faces/billTextClient.xhtml?bill_id=201720180AB1250)  which if it passes would block county governments from outsourcing work that would displace employees. “If AB1250 passes, this is moot,” the woman said. When another woman in the audience asked what would happen to staff if the outsourcing goes ahead, Gavares quickly said, “That’s a wrap for the meeting. Write that down and we’ll see if there’s a way of communicating that.” Workman said the information from all three public meetings will be combined and reported out to the public.

People who asked the consultant loudly who they could talk to about having more input and more notice of meetings were answered by others seated near them, “County Supervisor Diane Jacob.”

Jacob was not at the meeting. She and her staff responded to East County Magazine by email afterward, stating that the County Chief Administrative Officer is responsible for handling public input on the outsourcing issue. In addition to the other planned meetings, people can provide input to the Supervisors’ staff via phone, email, letter or a personal appearance before the Board during the public communication part of the regular agenda.

According to a resident of Potrero in East County, who helped stranded animals during the Border Fire in June 2016, the department’s short notice of public meetings is common. Jan Hedlun, who was not at the Ramona meeting, was asked by East County Magazine for a general comment. She said, “Being in a small rural community there are limited ways that we are kept informed and only a very small portion of the community knows when something is upcoming.” She noted that some people in the community do not have Internet service, for example.

Many complaints about Animal Services were raised by Potrero residents during and after the 2016 Border Fire, when pets and livestock were stranded in the evacuation area with owners away and unable to care for them in triple digit heat. Some animals died before they could be reached and others would likely have perished if not for intervention by outside community groups that arranged caravans of relief supplies.

DeSousa said in meeting with residents after that fire that Animal Services had only one employee for every 80,000 County residents and some had no experience during emergencies, though they did rescue 145 animals. 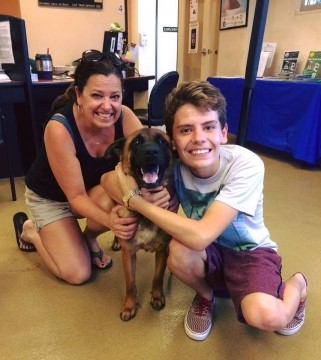 Hedlun believes Animal Services did their best during the Border Fire but “dropped the ball by not coming back to help.” She had no comment on the possibility of the Humane Society taking over services.

Dan DeSousa, Deputy Director of Animals Services in 2012, told The San Diego Union-Tribune in this article (http://www.sandiegouniontribune.com/ramona-sentinel/sdrs-lessons-from-2003-2007-wildfires-2012oct17-story.html ) that the evacuation of horses during the Cedar Fire in 2003 was “chaos” but that efforts had improved by the time of the Witch Creek Fire in 2007, due to Animal Control officers’ laptops and GPS devices. “Ultimately, it’s the responsibility of owners to evacuate their pets,” he said.

One person attending the Ramona meeting gave a comment about outsourcing to this reporter. “I’m a volunteer involved in animal rescue and I’ve talked to a lot of people in animal rescue in this county and no one is for this (outsourcing).”

What do you think about the possibility of outsourcing? Which organization do you believe is qualified and capable?

Do you feel that the County should be responsible for all evacuation of animals during emergencies? Why or why not? If not, who else should take responsibility? Which other organizations might help or who has helped you in the past?