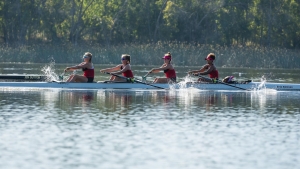 April 27, 2019 (Gold River, Calif.) - The San Diego State rowing team competed in three preliminary events and one final event in the first day of the Western Intercollegiate Rowing Association Championship on Saturday, claiming the best time in all three prelims and gold in the second varsity four final.

“We are very happy with winning all four races and already having a set of gold medals for the flight home,” head coach Bill Zack said after Saturday’s events. “Each of the crews in the Sunday finals know that the racing will be very close and what they need to execute better in order to finish where we want to.”

In the Aztecs’ first event of the morning on Lake Natoma, the team’s varsity eight crew finished with the fastest time of the second heat in 6:42.371. The second crew to finish was the Loyola Marymount V8 in 6:44.407, followed by University of Portland (6:51.944) and Saint Mary’s (7:01.075). SDSU will be joined by LMU and University of Portland, as well as Stanford Lightweight, University of San Diego and conference foe Sacramento State in Sunday’s final event at 8:30 a.m.

The Scarlet and Black second varsity eight shared similar success, finishing with the best time of the second heat of the 2V8 prelims, completing the course in 6:57.754. The Aztecs came in with a solid margin over Stanford Lightweight (7:11.741), who were trailed by University of Portland (7:16.022) and Saint Mary’s (7:34.155). The top three crews from heat two are set to compete against Sac State, LMU and USD in Sunday’s final at 9:40 a.m.

“Our team swept the first day at WIRAs, and the V4+ was no exception,” freshman coxswain Madison Fisk said. “Off the start, we got out in front and stayed in front. LMU made a push as expected, but the boat was quick to respond and started opening up the gap we wanted approaching the sprint. The V4+ finished first with a 5-second lead and an official time of 7:39.7 in variable headwinds. Based on past races, I think we went out on the course this morning knowing exactly what we needed to do. We're pleased to have executed today and excited to proceed in raising the bar for ourselves tomorrow.”

Links to a live video stream, as well as live results, for Sunday’s final events will be available at GoAztecs.com. Following the WIRA Championships, San Diego State prepares for The American Conference Championships, which are set for Sunday, May 19, in Oklahoma City, Okla.