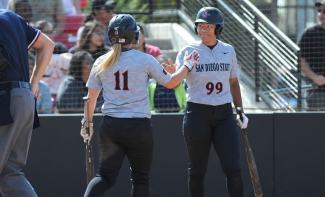 Aztecs down Rebels to win first MW series of season

Down by a 1-0 score after five innings, SDSU scored two runs in the top of the sixth and twice more in the seventh to pull away.

In the sixth, San Diego State used four hits, including a single by Taylor Adams to score Shelby Thompson and a single by Katie Byrd to plate Janina Jusay with the tying and go-ahead runs.

In the seventh, the Aztecs had two hits and took advantage of three Rebel errors to score a pair of runs. The first run of the inning came when Kiera Wright’s groundout to third scored Jordyn Fick. Later in the inning Thompson scored all the way from first base on a UNLV throwing error with Kelsey Munoz at the plate.

The Rebels got their run in the fourth as they loaded the bases with no outs against SDSU starting pitcher Marissa Moreno on three straight singles. Moreno got Justine Federe to ground into a fielder’s choice to get the runner at home, but Samantha Diaz followed with a shallow single to right-center field to score Brooke Stover with the first run of the game. Moreno then got Myranda Bueno to ground out to Thompson at shortstop to get out of the inning with only one run allowed.

UNLV also threatened in the fifth up 1-0 against San Diego State relief pitcher Julie McDonald. Reina Bondi hit a one-out single and Mia Trejo followed with what looked like a sure home run over the left-field wall. Aztec left fielder Zaria Meshack, however, ran it down and reached over the fence to take the ball way, keeping the game within one run. The catch sparked the SDSU bats as it would record six of its nine hits and all four runs over the final two innings after the catch.

Byrd was a perfect 3-for-3 with an RBI to lead the San Diego State offense, while Adams had two hits and an RBI. Munoz also reached twice on a single and a walk.

The offense backed a solid pitching effort from the Aztec trio of Moreno, McDonald (2-2) and Alex Formby. Moreno allowed one run on six hits over four innings as the starter, striking out one against no walks. McDonald yielded just one hit in a scoreless inning of relief to pick up the win. Formby finished the game with two hits allowed in two scoreless innings, earning her first save of the season.

Pitcher Alex Formby picked up the 11th save of her career, which is tied for second all-time at SDSU with Samantha Beasley (2008-11) and just one off from Celena Velasquez’ school-record 12 saves set from 2003-06.

The final game of the SDSU-UNLV series starts at noon Sunday.