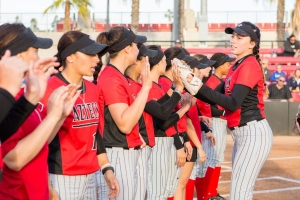 April 26, 2019 (Fort Collins, Colo.) - The San Diego State softball team lost its series opener at No. 25 Colorado State, 9-0, in six innings Friday afternoon in Fort Collins, Colo. The Aztecs had their three-game winning streak snapped and are now 20-23 on the season and 7-9 in Mountain West play, while the Rams improved to 35-7 and 16-3.

SDSU had the early scoring opportunities, but was unable to get a run across the plate.

San Diego State first threatened in the top of the first when Katie Byrd hit a one-out double and Shelby Thompson followed with a single up the middle. Byrd raced home on the play but was thrown out by centerfielder Ashley Michelena.

After retiring CSU in order in the bottom of the first, San Diego State loaded the bases with two outs in the second on back-to-back singles by Alicia Garcia and Aris Metcalfe, and a walk to Kristen Parker. Colorado State pitcher Bridgette Hutton, however, struck out Kiera Wright swinging to get out of the jam.

The Rams took advantage of their first scoring opportunity in the second when a two-out single by Isabella Navarro scored Lauren Buchanan from second base.

Colorado State added to its lead in the third as Ashley Ruiz hit a three-run home run, once again with two outs.

Following a lightning delay of 1 hour, 3 minutes, the Rams added to their lead in the fifth when Tara Shadowen connected on a two-run home run just over the center-field fence, thanks to a gusty wind. Later in the inning, Makenzie Miller scored from third on a wild pitch to make it 7-0 CSU.

Amber Nelson ended the run-rule win with a two-run homer in the sixth with two outs.

In all, Colorado State scored seven of its eight runs with two outs.

Marissa Moreno took the loss after allowing four runs on four hits, two walks and a hit batter over four innings. She is now 9-10 on the season.  Patirck Henry alum M.J. James relieved Moreno in the fifth and yielded five runs on six hits and a hit batter.

Katie Byrd doubled and now has 37 for her career, which ranks fourth in school history.

The game was delayed for 63 minutes (1 hour, 3 minutes) in the middle of the fifth inning because of lightning in the area.