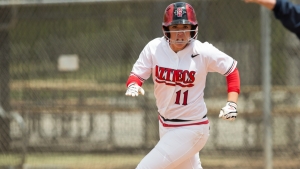 February 10, 2019 (Phoenix) - The San Diego State softball team finished its opening weekend with a 9-0 loss to No. 4/4 Oklahoma Sunday at the Grand Canyon University Kickoff Tournament in Phoenix.

The Aztecs (3-2) managed only one hit off Sooner (5-0) pitcher Shannon Saile, a single by West Hills alum Katie Byrd in the top of the first inning. Megan Smith and Molly Sturdivant also drew walks for SDSU.

After scoring two runs apiece in the first and second inning, OU broke the game open with five runs in the fourth, thanks in part to three San Diego State errors.

Saile then retired the Aztecs in order in the fifth to complete the run-rule victory.

Alicia Garcia took the loss for SDSU, surrendering four runs (three earned) on four hits and two walks over an inning of work. She is now 1-1 on the season.

Marissa Moreno finished the game for San Diego State, allowing five runs (one earned) on six hits and two walks over three innings, striking out one.

SDSU dropped to 1-11 all-time against Oklahoma.

3B/C Molly Sturdivant is the only Aztec to reach base safely in all five games this season.

San Diego State plays host to the 29th annual Campbell/Cartier Classic this weekend, beginning with a 6 p.m. game on Thursday against Middle Tennessee.  Follow @ECMagSports to see if ECM Sports will have live coverage of this game.