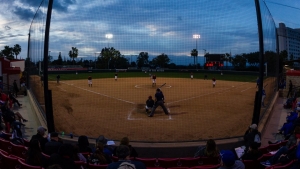 February 28, 2019 (San Diego) - San Diego State took advantage of a pair of Brigham Young errors in the bottom of the seventh inning to rally past the Cougars 2-1 in the first game of the San Diego Classic Thursday night at SDSU Softball Stadium. It was the fourth walk-off win of the season for the Aztecs (9-7) and third victory when trailing heading into the final inning.

With runners on first and second and one out in the seventh, pinch hitter Kylie Fraser’s hard hit ball was misplayed by BYU (6-8) third baseman Taylei Williams. Fraser beat the late throw to first, which scooted past the first baseman and allowed Kayla Sok to score and tie the game at 1-1. Taylor Adams followed with a chopper to second base against a drawn-in infield, but the throw to the plate was too late as Megan Smith raced home to give SDSU the 2-1 win.

The game was a pitcher’s duel between the 1-2 San Diego State punch of Marissa Moreno and Alicia Garcia (Mira Mesa HS), and Cougar pitcher Autumn Moffat. Moreno started the game for the Aztecs, and allowed one unearned run on two walks and no hits over 2 1/3 innings. She struck out two before exiting with an injury. Garcia (2-3) replaced Moreno in the third and ended up tossing 4 2/3 scoreless innings of relief, yielding two hits and two walks, while striking out three.

On the other side, Moffat gave up two unearned runs on three hits and three walks over 6 1/3 innings, striking out three.

San Diego State resumes its play in the San Diego Classic with a 7 p.m. Friday game against UIC.