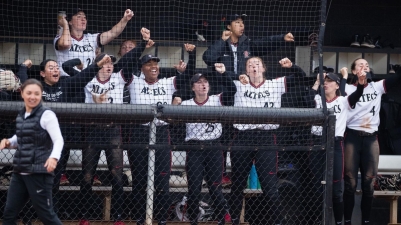 Balint (12-4) struck out 13 batters, including three in the first inning, two in the second, two in the third, two in the fourth, one in the fifth, one in the sixth and two in the seventh. Three of the five hits she allowed came in the top of the first inning, when the Wolf Pack (9-26, 1-8 MW) used three straight two-out singles with the last one coming from Jessica Sellers to score Aaliyah Jenkins. Danielle Lew followed with a walk, the lone one issued by Balint, to load the bases before Balint struck out Paris Schwalbe looking to get out of the inning.

San Diego State tied it in the bottom of the third when an Alexa Schultz groundout plated Nicole Siess.

The Aztecs took the lead in the sixth as Jillian Celis reached on a fielding error by Nevada second baseman Mia Misasi, moved to second on a sacrifice bunt by Jessica Cordola and scored on a Danielle Romanello single. Elianna Reyes replaced Romanello at first, advanced to second on passed ball and scored later on an AJ Murphy single for an insurance run.

Balint then struck out the side in the bottom of the seventh to finish off the complete game. Balint has nine double-digit strikeout games this season in 17 starts. She has 179 strikeouts on the year in 112 1/3 innings.

Bella Espinoza was 3-for-3 at the plate to lead SDSU, while Murphy had two hits, including a double.

SDSU has swept three straight league series for the first time since the MW went to a three-game series format in 2012.

San Diego State has won 11 consecutive games, tied for its fifth-longest winning streak in program history and longest since winning a school-record 13 straight games from March 12-April 6, 2013. That stretch was one of four times the Aztecs have won 13 straight games.

SDSU travels to UNLV for a weekend series with games set for 6 p.m. on Friday, 3 p.m. on Saturday and noon on Sunday.

Craft and Jenkins; Balint and Romanello