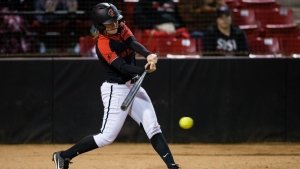 February 23, 2019 (Cathedral City, Calif.) - The San Diego State softball team was shut out by undefeated No. 25/23 Texas Tech 7-0 Saturday night in Cathedral City, Calif. The Aztecs fell to 7-6 on the season, while the Red Raiders improved to 13-0 with their third consecutive shutout at the Mary Nutter Collegiate Classic and fourth straight shutout overall.

SDSU managed only four baserunners for the game, including a double by Taylor Adams, and singles by Katie Byrd, Kelsey Munoz and Kristen Parker.

TTU used the long ball to account for five of its runs with a solo homer by Trenity Edwards in the top of the first inning, a solo home run by Kelcy Leach in the fourth and a three-run homer by Taylor Satchell in the fifth to effectively put the game away. Texas Tech also scored runs in the second on a wild pitch and a passed ball.

Marissa Moreno took the loss for San Diego State, allowing seven runs on eight hits, two walks and two wild pitches in 4 2/3 innings, while striking out five. She is now 4-3 on the season.

Alicia Garcia relieved Moreno in the fifth and tossed a scoreless 2 1/3 innings, yielding two hits and a walk with a pair of strikeouts.

The Aztecs ran into a Texas Tech team that recorded their third straight shutout at the Mary Nutter Collegate. The Red Raiders have outscored their three opponents--No. 15/13 Arizona State, No. 17/17 Oregon and San Diego State--for the weekend by a combined score of 20-0.

San Diego State wraps up its play in the Mary Nutter Collegiate Classic Sunday with a game against Cal Poly at 11:30 a.m.