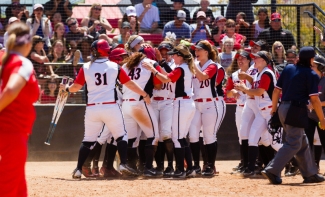 May 18, 2017 (San Diego) - A school-record six San Diego State softball players have been named to the all-NFCA West Region teams, the NFCA announced Thursday. The six selections easily broke the Aztecs’ previous best of four (2013 and 2015) as only six teams in the country had more players on their all-region team than SDSU this year.

Byrd, meanwhile, batted .361 with three home runs, 35 RBIs, 42 runs, 16 doubles, a .519 slugging percentage and a .428 on-base percentage. She currently ranks ninth in the country in doubles per game (0.35) and 49th in runs per game (0.91). In SDSU single-season history, Byrd finished her second year fourth in both runs and doubles. Yesterday, she was named a second-team all-MW selection.

Meshack finished the 2017 campaign with a .415 average, 34 runs, 61 hits, a .459 on-base percentage and seven stolen bases. Meshack, who yesterday made the all-MW first team, currently ranks 40th in the nation in batting average. Her .415 batting average was also the third best in San Diego State single-season history, while her 59 hits ranked fourth.

Cable batted .371 with six homers, 43 RBIs, 23 runs, eight doubles and nine walks. Among the NCAA leaders, Cable ranks 48th in sac flies (4) and 59th in RBIs per game (0.91). Her 43 RBIs were the 10th most in SDSU single-season history, while her four sac flies tied for fifth. Yesterday, she was named a first-team all-MW pick.