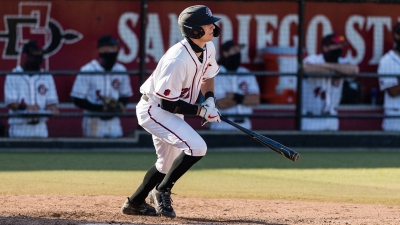 Jaden Fein finishes 4 for 4 at the plate

March 7, 2021 (San Diego) - San Diego State scored five runs in both the third and fifth innings on Sunday to roll past Fresno State 12-7 in the rubber game of a weekend set at Tony Gwynn Stadium.

With the victory, the Aztecs claimed their third straight series to open the season, improving to 7-3 overall and 2-1 in the Mountain West, while the Bulldogs slip to 3-4 on the year and 1-2 in conference play.

Two-time reigning MW Player of the Week Jaden Fein was once again the hitting star for the Scarlet and Black, recording a 4-for-4 performance with two RBIs and a run scored. The SDSU right fielder hit .750 for the series (9-12), raising his season batting average nearly 60 points from an already elevated .529 clip to an even loftier .587 after the weekend.

Not to be outdone, the Aztecs received some clutch hitting from Wyatt Hendrie and Jacob Cruce, who notched a pair of RBIs each, while Matt Rudick, Ryan Orr and Caden Miller finished with two hits apiece.

Sunday’s scoring bonanza could have been much higher; however, both teams stranded a combined 23 baserunners, including 13 for Fresno State. In addition, the contest featured 12 walks, six hit batters and three errors overall, while a total of 12 pitchers were utilized, including seven by SDSU.

SDSU found itself on the wrong side of a 2-0 tally in the first inning after Fresno State’s Ryan Higgins led off with homer, while Josh Lauck later scored on a fielding error.

The Aztecs finally dented the scoreboard in the third with the first of its two five-spots on the afternoon. The host school quickly loaded the bases when Mike Jarvis was hit by a pitch, Rudick singled to left, and Hendrie drew a walk. Moments later, Cruce looped a single to right center, plating Jarvis and Rudick. Fein and Miller soon followed run scoring singles, sandwiched around Orr’s groundout that brought home Cruce, putting SDSU in front 5-2.

The Aztecs extended the margin in the fourth when Hendrie belted his third home run of the year, a solo blast over the fence in left.

However, Fresno State put up five markers of its own on just two hits in the fifth, capitalizing on two walks, a pair of wild pitches, one error and a hit batter.  Nate Thimjon provided the big hit with a two-run single after Higgins brought in Zach Morgan with a sacrifice fly earlier in the frame.

Facing a sudden 7-6 deficit, SDSU responded with aplomb like it has all year, scoring five runs on five hits while benefitting from a costly error in its half of the fifth. Jarvis singled home Orr, who led off with an infield hit and advanced to third on Miller’s base hit to right following a line out. Moments later, Miller touched the plate on Hendrie’s sacrifice fly after Rudick was hit by a pitch. With two outs, Cruce reached on a throwing error by Lauck on a grounder to second, allowing Jarvis to score. Fein and Brian Leonhardt promptly knocked in Rudick and Cruce, respectively, on consecutive hits, which put the Aztecs in command 11-7.

Fresno State loaded the bases in the sixth, but Matt Ottino lined into a double play as Morgan was caught off first, while Aaron Eden struck out Andrew Kachel to end the threat.

SDSU closed out the scoring the sixth when Rudick drove in Orr with a two-out single through the right side. Previously, Orr roped a base hit to center while pinch hitter Fisher Pyatt drew a walk.

Despite giving up a run on two hits and a walk in 2/3 innings pitched, Nate Hansen (1-0), the fifth of seven Aztec hurlerss, earned the victory after entering in the fifth.

Eden followed Hansen with a scoreless three-inning appearance after Hansen, allowing two hits and one walk to go with a trio of strikeouts, while Tre Brown set down the Bulldogs in order in the ninth.

On the flip side, Fresno State’s third pitcher of the day Raul Salazar (0-1) was tagged with the loss after giving up six runs (three earned) on six hits in 1 2/3 innings after entering in the fourth for Robbie Peters.

San Diego State continues its homestand next weekend with a three-game series against UNLV March 13-14 at Tony Gwynn Stadium. The Aztecs and Rebels will square off in a doubleheader on Saturday before wrapping up the series with a single contest on Sunday.