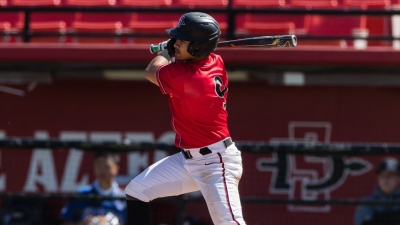 Despite the setback, SDSU (11-5, 6-3 MW) still registered its fifth straight series victory to open the season and remains tied for first atop the Mountain West standings with idle UNLV.

The top three hitters in the Aztecs’ batting order combined for 10 of the team’s 13 hits and seven of nine RBIs on the afternoon.

Matt Rudick led all players with four hits, while Wyatt Hendrie posted three hits and tied for game-high honors with four RBIs. In addition, the SDSU cause was aided by Mike Jarvis, who went 3-for-5 at the plate with three runs scored and two RBIs, while Jaden Fein crossed the plate on two occasions.

Trailing 8-3 after Air Force’s Paul Skenes hit a two-run homer in the top of the sixth, the Aztecs sent nine batters to the plate in their half of the frame, scoring five runs on four hits, one walk and a costly error.

Fein led off with a single and advanced to third when Brian Leonhardt got aboard on a dropped fly ball by Falcon right fielder Gabriel Garcia. Cole Carrigg followed with a base on balls, while Caden Miller knocked in Fein with a grounder to first. Moments later, Jarvis plated Leonhardt and Carrigg with a single to center, while Rudick followed with a base hit through the right side, as Jarvis darted around to third. After a wild pitch, Hendrie stepped up and delivered a two-run single, which knotted the game at 8-8.

However, the Falcons (7-8, 1-5 MW) vaulted back in front for good after notching three tallies in the eighth, as Skenes doubled home Cayden Zimmerman and Braydon Altorfer, who reached earlier on a single and walk, respectively. Shortly thereafter, Skenes crossed the plate on another double by Alexander Pup.

Trailing 11-8, SDSU got a run back in the bottom of the frame when Jarvis singled to center and advanced to second on a bobbled ball before racing home on Rudick’s RBI single.

The Aztecs were unable to draw closer, as Air Force tacked on two more runs in the ninth to account for the final score.

Skenes (1-0), who moved from catcher to the mound in the seventh, pitched the final three innings for his first win of the year, allowing one unearned run on two hits and a walk to go with a pair of strikeouts.

Conversely, Tre Brown (2-1) was saddled with his first loss of the year after giving up all five of the Falcons’ go-ahead runs on four hits and two walks in 1 1/3 innings before Kohl Simas got the final two outs in the ninth.

In all, SDSU utilized eight pitchers on the day, including three by the second inning when Air Force sent 10 men to the plate, scoring five runs on three hits, two walks and a wild pitch.  Blake Covin and Tommy Gillman contributed sacrifice flies in the frame, while Sam Kulasingam drew a bases-load walk to bring in another.

However, Gillman led off the fourth with a triple and later scored to increase the Falcon advantage to 6-3 before Skene went yard in the sixth.

Skenes, who totaled four RBIs on the afternoon, tied Pup for team-high honors with three hits, while Kulasingam, Altorfer and Cole Blatchford finished with two apiece.

San Diego State will venture out of the county for the first time this season when it travels to the Bay Area next weekend, March 27-28 for a three-game series at San José State.