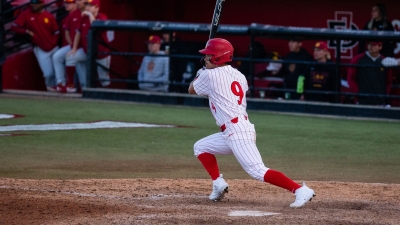 March 7, 2020 (Norman, Okla.) - San Diego State had its season-long four-game winning streak snapped Saturday in an 8-4 loss to No. 11/15 Oklahoma in the second game of a weekend series at L. Dale Mitchell Park.

Despite maintaining an 11-7 advantage in hits, the Aztecs (10-5) stranded nine runners, while the Sooners clubbed three home runs to fuel their victory.

Casey Schmitt paced the SDSU offense with a 3-for-5 performance at the plate and two RBIs, while Mike Jarvis, Matt Rudick and Brian Leonhardt finished with two hits apiece.

Aztec starter Troy Melton (3-1) suffered his first loss of the season after allowing six earned runs on five hits and three walks to go with five strikeouts in 5 2/3 innings.

After Peyton Graham homered in the bottom of the second to give OU a 1-0 lead, SDSU tied the game in the third when Schmitt smoked a triple to right center, plating Rudick who led off with an infield single.

However, the Sooners (12-4) went ahead for good when Graham went deep once again, belting a solo shot over the fence in center for his third round-tripper of the series.

Oklahoma increased its advantage to 5-1 in the fifth on two hits, one walk and a hit batter. Brandon Zaragoza singled through the left side to plate Brady Harlan, who drew a leadoff walked and moved to second when Kendall Pettis was hit by a pitch. Following an intentional walk to Tanner Tredaway, Brady Lindsly reached on an infield single, scoring Pettis, while Zaragoza raced home on a subsequent throwing error.

The Sooners tacked on two more runs in the sixth on a solo homer by Justin Mitchell and Logan Kohler’s RBI single before adding another marker in the eighth when Graham scored on Harlan’s single up the middle.

SDSU capitalized on two errors in the ninth, scoring three runs on four hits to pull within 8-4. Wyatt Hendrie led off with a double and promptly scored on Leonhardt’s single through the left side. After a dropped foul ball by the catcher, Jarvis doubled down the left-field line as Leonhardt motored home on a fielding error. Shortly thereafter, Schmitt knocked in Jarvis with his third hit of the afternoon; however, OU reliever Jaret Godman induced a flyout to end the game.

Sooner starter Levi Prater (1-0) picked up the victory, allowing one run on five hits and two walks while striking out 13 batters.

The two sides will wrap up their three-game series on Sunday, starting at 1 p.m. CT/11 a.m. PT.