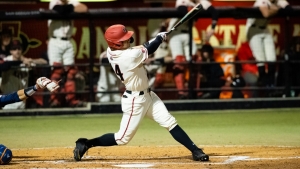 February 21, 2021 (San Diego) - San Diego State jumped out to a big lead in the final game of its season-opening series against San Diego but could not close the deal, as the Toreros rallied for 16-12 victory on Sunday at Fowler Park on the USD campus.

Despite the setback, the Aztecs (2-1) won two out of three in the weekend series against USD, which defeated the Scarlet and Black for only the second time at home since their new ballpark opened in 2013.

The SDSU offense was on full display once again, banging out 16 hits on the afternoon, including three each by Mike Jarvis and Matt Rudick, while Wyatt Hendrie, Jacob Cruce, Jaden Fein and Brian Leonhardt finished with two apiece.

The Aztecs’ first four batters, Jarvis, Rudick, Hendrie and Cruce, hit a collective .500 for the day (10-20) with seven RBIs and eight runs scored.

However, SDSU was stymied by Torero reliever Ivran Romero, who allowed just one hit over the final three innings while striking out three.

Romero (1-0) picked up the victory, while Casey O’Sullivan (0-1) absorbed the loss after giving up five runs (one earned) in the fateful eighth.

SDSU starter Michael Paredes allowed three runs on three hits and one walk to go with a pair of strikeout before exiting after five innings.

After adding a single marker in the third on Fein’s run-scoring single up the middle, the Toreros dented the scoreboard when Shane McGuire drilled a two-run homer to right.

The Aztecs gave themselves some separation in the fourth when Caden Miller raced home on an RBI double by Jarvis, who promptly scored on Rudick’s single through the right side. Earlier, Cole Carrigg touched the plate on a throwing error by the catcher McGuire following a wild pitch.

Following a solo homer by USD’s Thomas Luevano in the fourth, SDSU put up six markers in the sixth, highlighted by Hendrie’s three-run shot over the fence in left, while Ryan Orr delivered a two-run single.

The Aztecs’ 12-3 lead began to crumble in the bottom of the frame, as the Toreros scored three runs on four hits, including an RBI double by Cody Jefferis, who later scored on Kevin Sim’s single. Previously, McGuire led off the inning with a base hit and later scored on a wild pitch.

USD trimmed the margin to 12-10 in the seventh, scoring four runs without a hit, benefiting from two walks, two hit batters, a wild pitch and a passed ball.

Clinging to a precarious lead, the roof ultimately caved in on SDSU in the eighth when the Toreros sent 12 men to the plate, scoring six runs on four hits and one error. Max Jung-Goldberg led off with a walk and eventually scored on a wild throw to first after Tora Otsuka’s bunt. He also came to bat later in the frame, smacking a two-run single to close out the scoring.

San Diego State returns to the diamond next weekend when it takes on another local team in UC San Diego, Feb. 26-28. The Aztecs and Tritons will clash at Tony Gwynn Stadium on Friday and Saturday before the teams complete the series with a Sunday doubleheader on the UCSD campus.