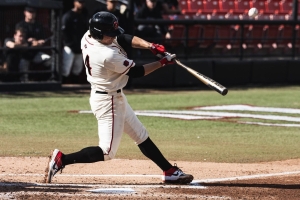 The five home runs hit by the Aztecs accounted for 10 of SDSU's 11 runs, as Mike Jarvis and Casey Schmitt both hit a pair while Julian Escobedo hit his fifth long ball of the season in the top of the first.

Jarvis broke the game wide open in the sixth, hitting a grand slam giving SDSU an 8-1 lead in the middle stages of the game.

On the very next pitch Jarvis saw, the junior infielder launched his second home run and fourth of the season, pushing SDSU's lead to 9-2 in the eighth inning.

Three batters later, Schmitt hit his second home run of the season -- a two-run home run to give SDSU its 10th and 11th runs of the game.

Schmitt finished his day with a career-high five hits, going 5-for-5 with three RBIs. Schmitt's five hits are also the most by an Aztec this season.

On the mound, Michael Paredes made his first career Friday night start and performed well, limiting the Rebels to just one run on six hits while striking out a pair and walking three. Jacob Flores earned the rare four-inning save, allowing one earned run while scattering seven hits and striking out two.

In addition to Jarvis and Schmitt, Escobedo and Ryan Orr both provided multi-hit performances with two hits each.

SDSU looks to extend its winning streak when playing UNLV to nine games and capture a series win tomorrow night at 6:00 p.m. The Aztecs will send RHP Justin Goossen-Brown (5-2, 3.02 ERA) to the mound against UNLV's RHP Ryan Hare (6-2, 3.04 ERA).