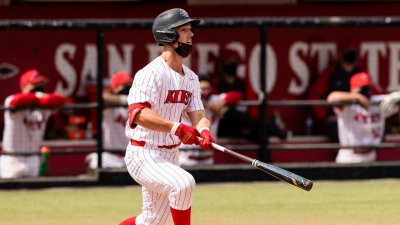 March 28, 2021 (San Jose) - San Diego State captured its sixth straight series victory on Sunday with a 14-4 rout of San José State in eight innings to close out its weekend set at Excite Ballpark.

The Aztecs erupted for 13 of their 14 runs in the final four innings to notch their second win of the year via run rule, improving to 13-6 overall and 8-4 in the Mountain West.

SDSU had four players finish with multiple hits in the series finale, including Jacob Cruce, who went 3-for-4 with a career-high four RBIs, highlighted by his first homer of the season, a solo shot in the third that gave the Scarlet and Black an early 1-0 advantage.

Mike Jarvis, Brian Leonhardt and Wyatt Hendrie also got into the act with two hits and two runs scored apiece, while Caden Miller crossed the plate on two occasions as well.

With the score knotted at 1-1, SDSU plated three runs in the fifth to take the lead for good. After two outs, Hendrie knocked in Jarvis with an RBI single up the middle and later scored on a Leonhardt double to center. Moments later, Jaden Fein was hit by a pitch, spelling the end of the day for SJSU starter Keaton Chase. Making matters worse, Spartan reliever Ben Polack promptly plunked Ryan Orr before throwing consecutive wild pitches, with Leonhardt scoring on the latter.

Leading 4-1, the Aztecs sent nine batters to the plate in the sixth, breaking the game wide open with five runs on four hits and two walks. SDSU loaded the bases when Miller and Matt Rudick each drew a base on balls, sandwiched around a Jarvis bunt single. Hendrie soon reached on a slow roller to short, which brought in Miller, while Rudick and Jarvis raced home on Leonhardt’s base hit to center. After two more wild pitches, Fein’s ground out plated Hendrie, while Leonhardt crossed the plate on Cruce’s single to right.

The Spartans narrowed the gap to 9-4 with three runs in the seventh; however, the Aztecs quashed any hopes of an SJSU comeback with another five-spot in the eighth. Fein and pinch runner Charlie Rhee touched home on a double by Cruce, who later scored on Miller’s two-run triple, which also brought in Fisher Pyatt.

Leonhardt, who took the mound for the final two outs in the seventh, remained on the hill in the eighth, allowing consecutive one-out singles before getting out of the jam with a fielder’s choice grounder and a pop out.

The Spartans utilized five pitchers on the day, with Chase (0-1) absorbing the loss after giving up four runs on five hits and four walks with just one strikeout in 4 2/3 innings.

Robert Hamchuk and Ruben Mercado led SJSU with two hits apiece in the loss, while Ruben Ibarra hit a leadoff homer in the fourth.

San Diego State returns to “America’s Finest City” to take on New Mexico in a three-game series April 2-3 at Tony Gwynn Stadium. The Aztecs and Lobos will meet in a doubleheader on Friday before closing with a single game on Saturday.