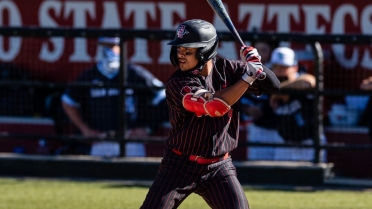 March 6, 2021 (San Diego) - San Diego State opened its 2021 Mountain West schedule with a doubleheader split against visiting Fresno State on Saturday, posting a huge 17-0 run-rule victory in the nightcap after dropping a narrow 3-2 decision in game one at Tony Gwynn Stadium.

Aztec starter Troy Melton (2-0) tossed a complete game shutout in the second contest, matching his career-high with nine strikeouts while allowing four hits and one walk in seven innings for his second win of the year.

Offensively, Mike Jarvis, Wyatt Hendrie and Jaden Fein contributed four RBIs each, while Matt Rudick and Caden Miller scored three runs each, helping the Scarlet and Black improve to 6-3 on the season and 1-1 in conference play.

In addition, Jarvis and Ryan Orr led all players with three hit apiece, while Rudick and Fein finished with two each.

After scoring three runs in the first, SDSU broke the game open in the second with 11 markers on just six hits, capitalizing on three errors while sending 16 batters to the plate. The Aztecs also drew three walks and stole a base to help fuel their big inning.

Fein, the reigning MW Player of the Week, provided the big bat in the frame with a pair of two-run singles, while Wyatt Hendrie was hit by a pitch with the bases loaded.

Later in the fifth, Jarvis looped a three-run double into left-center field, scoring Charlie Rhee, Max Foxcroft and Miller to account for the final margin.

In a harbinger of things to come, Dixon gave up two-run homer to Hendrie in the first after Rudick hit a one-out single to center. Moments, later, Fein drew a walk and was nearly picked off but managed to motor around to third after Dixon’s errant throw to first. Brian Leonhardt promptly brought home Fein with an RBI single to put the hosts in front for good 3-0.

The Bulldogs advanced only one runner to third the entire game, and it occurred with two outs in the seventh inning on a wild pitch. However, Melton fanned Dylan Johnson to end the contest, the third of his trio of strikeouts in the frame.

In the opener, SDSU maintained an 11-6 advantage in hits but stranded eight runners and ground into two double plays in a tough loss.

The Bulldogs (3-3, 1-1 MW) drew first blood on Zach Presno’s homer in the top of the fourth before Rudick went yard for the first time this year with a solo shot of his own in the sixth, which tied the score at 1-1.

Andrews led off the inning with a walk, while Matt Ottino reached on a throwing error by third baseman Cole Carrigg. Andrew Kachel then singled through the left side to load the bases. After Ryan Higgins struck out, the Aztecs caught an unlucky break when Carrigg and Jarvis collided on Presno’s two-out grounder, which would have likely ended the frame.

SDSU got a run back with two outs in the eighth when Fein knocked in Hendrie with a run-scoring single. Previously, Hendrie reached on a base hit to left and quickly advance on a wild pitch.

The Aztecs put two aboard in the ninth when Foxcroft walked and Miller reached on a bunt single. However, Bulldog reliever Oscar Carvajal induced a double-play grounder and a foul out to dash SDSU’s comeback hopes and record the save.

Fresno State’s Robbie Peters (1-0), who relieved starter Jamison Hill with one out in the fifth, picked up the victory, walking just one in his brief 2/3 inning appearance. Hill, who gave up Rudick’s homer, allowed eight hits and no walks.

Conversely, Christian Winston (1-1) absorbed the loss after getting just one out in the seventh in relief of starter Michael Paredes. Parades yielded Presno’s home run but otherwise held the Bulldogs in check for six innings, allowing four hits and two walks while striking out six.

Fein led the Aztecs with three hits in the game, while Hendrie and Miller had two apiece.

The two teams close out their weekend series on Sunday with a single game starting at 1 p.m.