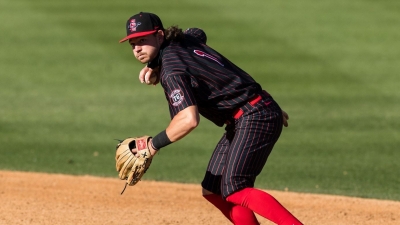 March 13, 2021 (San Diego) - Behind a strong pitching performance from starter Michael Paredes, San Diego State registered a 3-1 triumph over UNLV in the first game of a doubleheader on Saturday before dropping a 5-1 decision in the nightcap.

Despite the split, the Aztecs (8-4, 3-2 MW) will be aiming for their fourth straight series victory on Sunday when they face the Rebels (6-2, 6-2 MW) in the rubber game of the weekend set at Tony Gwynn Stadium.

In game one, Paredes (1-0) went eight innings to pick up his first win of the year, allowing just one unearned run on three hits with no runs while tying his season-high with six strikeouts.

Reliever Tre Brown entered in the ninth and set down all three UNLV batters to collect his first save of the year.

Offensively, SDSU was once again led by three-time reigning Mountain West Player of the Week Jaden Fein, who finished with a 3-for-4 effort at the plate and scored a run, while Matt Rudick and Jacob Cruce smacked a pair of hits each.

The Aztecs drew first blood in the second when Fein raced home after Brian Leonhardt was caught in a rundown between first and second. Earlier, Fein reached on an infield single, advancing to second on Leonhardt’s base hit to right before stealing third.

The Rebels knotted the score with an unearned run in the third when Diego Alarcon’s RBI single plated James Gamble, who reached on a fielder’s choice and moved to third after Jordan Andrade’s grounder to short was bobbled. Moments later, SDSU avoided further damage when a relay throw on a double play attempt went wide of first. However, Cruce alertly threw to plate to nail Andrade, who tried to score from second.

The Aztecs vaulted in front for good 2-1 when Rudick knocked in Mike Jarvis with a clutch two-out hit to center. Previously, Jarvis reached on a fielding error and promptly stole second.

SDSU added an insurance run in the sixth when Ryan Orr’s sacrifice fly brought home Cruce, who led off with a single and moved to third on Fein’s double to left.

In the interim, Paredes held the Rebels in check, retiring 15 straight batters between the fourth and eighth innings.

UNLV starter Chase Maddux (1-1) was tagged with the loss, yielding all three runs on eight hits to go with six strikeouts of his own in 7 2/3 innings.

The Aztecs had the tables turned against them in game two, as the Rebel combo of starter Bradley Spooner and Conner Woods limited the Scarlet and Black to just five hits.

UNLV jumped out to the early lead in the second on Austin Kryszczuk’s two-run homer off SDSU starter Troy Melton after Edarian Williams led off with a walk.

The Aztecs responded with a marker in the third when Wyatt Hendrie’s two-out RBI single plated Jarvis, who reached on a base hit to right and stole second before advancing to third on Rudick’s groundout.

The score remained unchanged until the sixth when Trevor Rosenberg’s single through the right side brought home Austin Pfeifer, chasing Melton in the process. Pfeifer drew a base on balls to lead off the frame, advancing to third on a sacrifice and wild pitch, respectively.

The Rebels effectively put the game out of reach with two additional runs in the eighth after Rosenberg scored on an RBI single by Jack-Thomas Wold, who was subsequently erased at second on Myles Denson’s grounder that brought home Alarcon.

Spooner (1-0) gave up one run on four hits in five innings to go with four strikeouts, while Woods allowed one hit the rest of the way to record the save.

Conversely, Melton (2-1) absorbed his first loss of the year after yielding three runs on six hits and five walks with a trio of strikeouts in 5 1/3 innings. Christian Winston (2.0 innings) and Kelena Sauer (1 2/3 innings) allowed identical totals in their respective relief appearances, both giving up a run on two hits and two walks, while each record a pair of strikeouts.

Eight different UNLV players recorded at least one of the team’s 10 hits, including two apiece by Wold and Alarcon.

On the flip side, Jarvis had a pair of hits to lead SDSU.

Sunday’s series finale is scheduled to get underway at 1 p.m. with a link to streaming video available on GoAztecs.com.