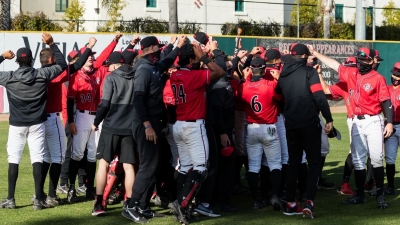 March 27, 2021 (San Jose) - Making its first road trip outside of the county this season, San Diego State split a doubleheader at San Jose State on Saturday, winning the opener by a 6-4 tally before dropping the nightcap, 12-7, at Excite Ballpark.

With the split, the Aztecs maintain a one-game over UNLV in the Mountain West race, moving to 12-6 overall and 7-4 in conference play, while the Rebels (8-6, 6-5 MW) lost both games of a doubleheader at Air Force on Saturday.

Conversely, the Spartans (1-1, 1-1 MW) were seeing their first action of the season after pausing all team activities on Feb. 15 due to COVID-19 protocols.

In game one, SDSU was led by the duo of Mike Jarvis and Matt Rudick, who combined for seven of the team’s nine hits and scored four of the squad’s six runs. Jarvis notched his 10th multi-hit game of the season after a 4-for-4 performance at the plate with three runs scored, while Rudick added three hits of his own to go with two stolen bases and a season-high three RBIs.

Jarvis set the tone early with a solo shot in the first on a 1-2 pitch, giving the Scarlet and Black a 1-0 advantage. However, SJSU countered with a run in its half of the frame when Ruben Ibarra singled and scored from first on Robert Hamchuk’s double to right.

The score remained knotted until the fourth when SJSU took the lead with two outs following a Connor Konishi triple and a Nelson Padilla single.

Stung, the Aztecs responded with two markers in the fifth to vault in front for good. With one out, Jarvis and Rudick hit back-to-back doubles, while Wyatt Hendrie was hit by a pitch. After Spartan starter Jonathan Clark uncorked a wild pitch, Rudick subsequently raced home on Brian Leonhardt’s sacrifice fly.

SDSU extended its advantage to 6-2 with two more runs in the sixth off SJSU reliever Corey Sanchez. Ryan Orr drew a leadoff walk, stole second and advanced to third on a passed ball before eventually touching the plate on Sanchez’s wild pitch. Shortly thereafter, Caden Miller singled and Jarvis walked, with both runners moving up on another wild pitch, while Rudick soon followed with a two-run single up the middle.

The Spartans narrowed the gap with a run in the sixth on Jack Collette’s RBI single in the sixth, while Ibarra added a sacrifice fly in the seventh, which brought home Jackson Forbes, who walked and advanced on a wild pitch and a groundout.

SJSU put two runners aboard with two outs in the eighth, but reliever Tre Brown induced a fielder’s choice grounder to extinguish the threat. Despite hitting a batter with two outs in the ninth, Brown got Konishi to fly out on the first pitch to collect his third save of the season.

Aztec starter Michael Paredes raised his record to 3-0 on the year, allowing three runs on nine hits and a walk to go with five strikeouts in six innings before Joseph Ingrassia and Kelena Sauer entered in relief, respectively.

Conversely, Clark (0-1) took the loss after yielding three runs on five hits and three walks while adding a trio of strikeouts.

Collette, Hamchuk and Mercado had two hits apiece for the Spartans, who out-hit SDSU, 10-9. However, SJSU stranded 10 runners on base.

In the nightcap, the Aztecs received an atypical short outing from starter Troy Melton (3-2), who was rocked for six runs on six hits and two walks in just 2 2/3 innings.

The teams combined for 27 hits, but the Spartans plated four runs in the both the third and sixth innings, overcoming a 3-2 deficit to pull away.

Trailing 2-1 to open the third, Rudick and Hendrie laced consecutive singles, with the former advancing to third on a Leonhardt flyout. Moments later, Fein followed with an RBI single as Hendrie took third. Orr subsequently struck out, but the Aztecs pulled off a double steal on the play, as Hendrie slid across the plate ahead of the throw home.

However, the lead quickly vanished in the bottom of the inning when Colette doubled in three runs with the bases loaded and later scored on Nelson Padilla’s RBI single, which gave the host school a 6-3 advantage it would not relinquish.

SDSU trimmed the margin to 6-4 in the fourth after Fisher Pyatt scored on Hendrie’s sacrifice fly, but SJSU added to its lead in the bottom of the frame on Ibarra’s RBI double, while Padilla followed with a solo homer in the fifth to make the score 8-4.

The Spartans then added four tallies in the sixth to build an insurmountable 12-4 bulge.

The Aztecs accounted for the final three scores in the contest on Jacob Cruce’s sacrifice fly in the seventh, while Miller delivered a two-run single with two outs in the ninth.

Five players finished with two hits for SDSU, including Miller, Cruce, Fein and Jarvis and Pyatt, who also scored a pair of runs along with Leonhardt. However, the Aztecs left 12 runners aboard, including a bases-loaded opportunity in the second.

SJSU starter Spencer Long (1-0) got out of that jam with a strikeout and a flyout, ultimately earning the victory after giving up four runs on nine hits and two walks against five strikeouts in six innings. Wesley Clawson tossed the final three innings to collect the save despite allowing three runs on four hits and two walks.

Padilla had four hits to lead all players, while Colette (3 RBIs) and Hamchuk scored three runs each.

The Aztecs and Spartans close out their weekend series with a single game on Sunday at Excite Ballpark. First pitch is set for 1 p.m.