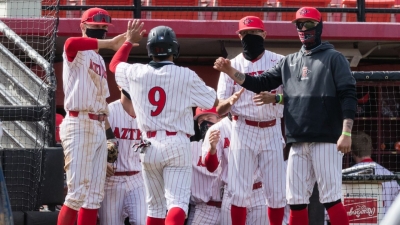 March 20, 2021 (San Diego) - Behind a pair of solid pitching performances from Michael Paredes and Troy Melton and an opportunistic offense, San Diego State swept both games of a doubleheader from visiting Air Force on Saturday at Tony Gwynn Stadium.

The Aztecs won the opener by a 9-2 count before claiming a 5-1 decision in the nightcap, improving to 11-4 overall and 6-2 in the Mountain West.

SDSU pitchers struck out a combined 22 batters in the twin-bill, as the Scarlet and Black took over sole possession of first place in the conference standings, a half-game ahead of idle UNLV (7-3, 6-3 MW).

In game one, Paredes (2-0) tied his career-high with nine strikeouts, picking up his second win in a row after giving up two runs on five hits and one walk in 7 2/3 innings, while Seth Urbon came on to get the final four outs.

Collectively, the Aztecs out-hit the Falcons 9-8, scoring six unearned runs on four errors by the visitors.

Individually, Matt Rudick and Jacob Cruce finished with two hits apiece for the Scarlet and Black, while Brian Leonhardt recorded a pair of RBIs.

SDSU plated a run in the first after Mike Jarvis drew a leadoff walk, stole second and advanced to third on the Air Force catcher’s throwing error to the bag. Moments later, Falcon starter John Byrnes uncorked a wild pitch, with Jarvis sliding safely into home.

The Falcons knotted the score in the second on consecutive one-out doubles by Cole Blatchford and Christian Gambale.

However, the Aztecs took the lead for good with a pair of markers in the fourth. Matt Rudick led off with a triple to right field and promptly scored on an RBI single by Wyatt Hendrie, who eventually touched the plate on Leonhardt’s sacrifice fly.

SDSU broke the game open in the sixth with six runs (five unearned) on five hits, two walks and wild pitch, while Air Force committed three costly errors. Cruce, Leonhardt and Caden Miller all delivered RBI singles, while Ryan Orr brought in another, as the Aztecs sent 12 batters to the plate against Falcon relievers CJ Dornak and Jason Shuger, with the former replacing Byrnes to open the inning.

Air Force accounted for the final 9-2 margin when Blatchford hit a solo homer in the seventh. Between both Falcon runs, Paredes yielded just one Falcon hit—an infield single to Blake Covin in the sixth.

Byrnes (1-2) absorbed the loss after allowing three runs on three hits and two walks in five innings of work, while Blatchford led the team with three hits.

In the nightcap, Melton improved to 3-1 on the year after yielding one run on five hits and one walk to go with eight strikeouts of his own in seven innings.

Air Force’s lone tally came in the third when Sam Kulasingam led off with a solo shot to right, while Colvin followed with a bunt single and advanced to second on a throwing error. However, Melton got Tommy Gillman looking on a called third strike before inducing a groundout to Gabriel Garcia to avoid further damage.

SDSU jumped into the lead for good in the third, scoring three unearned runs on Jaden Fein’s two-out double to right. Previously, Miller smacked a one-out double down the left field line, while Rudick walked after a flyout. Moments later, Hendrie reached on a fielding error to load the bases, while Miller eventually crossed the plate when Cruce drew another walk. Hendrie and Rudick then raced home on Fein’s clutch hit.

The Aztecs extended their lead to 4-1 in the fourth on Jarvis’ RBI single, which plated Cole Carrigg, who reached on an error and stole second.

Carrigg also scored Scarlet and Black’s final tally of the night after reaching on a fielder’s score before motoring around the bases on Miller’s single which was mishandled by Garcia in right field.

Once again, SDSU out-hit the Falcons 9-8 as Miller, Orr, Fein and Jarvis finished with two apiece.

Leonhardt and Kohl Simas each gave up one hit their respective one-inning relief appearances after Melton, as the latter struck out three in the ninth.

Steven Fairburn Jr. (2-3) was tagged with the loss for Air Force, allowing four unearned runs on five hits and three walks in five innings of work before giving way to Nathan Price to open the sixth.

UP NEXT: The Aztecs and Falcons will wrap up their weekend series with a single game on Sunday, starting at 1 p.m.