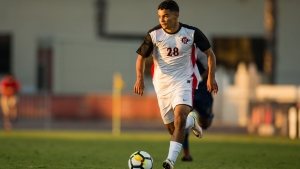 The Aztecs had 12 shots to Stanford’s 10, but put just two on goal.

SDSU had a strong first half and neutralized the Cardinal attack by clogging their passing lanes. At the break, both teams had one shot on goal.

Stanford, who is receiving votes in the latest United Soccer Coaches Poll, took a two goal lead in a blink of an eye early in the second half. In the 55th minute, Stanford scored on a set-play on a throw in. After a short throw, they sent a cross in to the box where Logan Panchot headed it inside the far post.

Just 83 seconds later, the Cardinal struck again when Zach Ryan scored after a long run down the left wing.

Stanford’s final goal came in the 66th minute when Amir Bashti slotted a shot in the top right corner from 18 yards out.

The Aztecs’ best opportunity came in the 58th minute when Damian German had a shot ricochet off the crossbar.

The three goals allowed were the most goalkeeper Cameron Hogg (4-3-1) and the Aztecs have allowed this season. Stanford’s keeper Andrew Thomas (4-1-3), who entered the match with the third best goals allowed average in the nation, registered his fifth shutout of the season.

The Aztecs continue their Bay Area road trip on Sunday when they play at Cal at noon. The match will be shown on Pac-12 Bay Area (subscription required).

The Aztecs attempted just one corner kick. They entered the match first in the Pac-12 and 17th in the nation in corner kicks attempted per game.

This was only the second time the Aztecs have been shutout this season and the first time since their season opener at Santa Clara on August 24th.