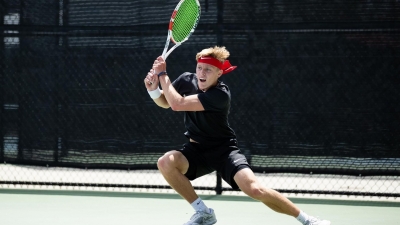 April 29, 2022 (Colorado Springs) - With the Aztecs up 3-2 at Air Force, Judson Blair won in straight sets to secure a victory for the 4-seed San Diego State men’s tennis team over 5-seed Air Force in the opening round of the 2022 Mountain West Championship on Friday afternoon at the USAF Academy’s indoor tennis facility.

With the 4-2-win, San Diego State improves to 8-11 on the season and will play 1-seed Nevada on Saturday at 2 p.m. MT in the semifinals. The Falcons fell to 15-9 and have been eliminated from the championship.

In conference tournament play, the Aztecs have defeated Air Force eighth straight times, including five straight as members of the Mountain West. SDSU’s all-time record against the Falcons improves to 34-2, which includes a 4-1 regular season win at Aztec Tennis Center earlier this season.

Trailing 1-0 in doubles after the Aztecs’ No. 3 pair of Alexander Mandma and Judson Blair were vanquished 6-1 by the Falcons’ Justin Waldman and Nick Vroman, San Diego State rallied to take wins at both the No. 1 and No. 2 positions.  Joe Tyler and Victor Castro, the Aztecs No. 1 duo, were up 4-3, broke Air Force’s serve and then Tyler closed the match by blanking AFA’s Robert Baylon and Jordan Azuma in the final game for the 6-3 victory.

In the deciding doubles match, Johannes Seeman and Roni Rikkonen played a back-and-forth match with Air Force’s Jonathan Mascagni and Arjun Kersten. SDSU trailed 5-4 and needed to hold serve to keep the match going. They did and then broke the Falcons serve to go up 6-5. Air Force tied it 6-6 to send the match to a tiebreaker, which SDSU won 7-5 to secure the first point.

Air Force tied the match 1-1 with a win at No. 3 singles. Castro, who was riding a three-match win streak and was named an All-Mountain West performer in doubles earlier in the day, pushed AFA’s Arjun Kersten in two sets, but succumbed in matching 7-5 scores. The Falcons point was its first in the league tournament seven years.

An All-Mountain West singles and doubles honoree, Tyler, at No. 1, showed the coaches were correct in selecting him for the distinctions, dispensing the Falcons’ Baylon 7-6, 6-4 to put SDSU back in front 2-1 and improve his team-leading win streak to four matches.

Air Force leveled the match, when Vroman defeated Mandma 7-5, 7-6 (1), at the No. 4 position. The loss snapped a two-match win streak for the Tallinn, Estonia native.

The win was secured by Blair, at the No. 5 position. He did it in straight sets 6-3, 6-3 over Waldman giving San Diego State the win and its seventh straight opening round victory at the Mountain West Championship.

If things had not gone the Aztecs' way in the Blair match, Rikkonen was up on Luke Wolf 7-5, 4-3 at No. 6 and looked to close things out for the Scarlet and Black, if needed.

Saturday’s matchup with Nevada will be streamed live on the Mountain West Network and will also have live results. Links for both will be available at the men’s tennis schedule page at goaztecs.com.