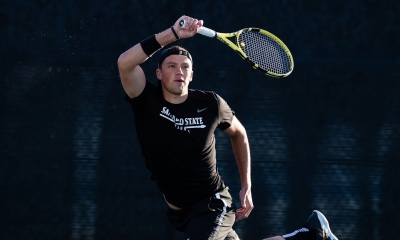 April 30, 2022 (Colorado Springs) - The San Diego State men’s tennis team saw its season come to an end on Saturday afternoon at the Air Force Outdoor Tennis Center in a 4-1 defeat at the hands of the Nevada Wolf Pack in the semifinal round of the 2022 Mountain West Championship.

The 4-seed Aztecs finish the year with an 8-12 mark, while Nevada, with an 18-7 record and the 1-seed, advances to play New Mexico tomorrow for the league title and automatic bid to the NCAA Championship.

In the doubles competition, Nevada took wins at No. 1 and No. 3 with identical 6-4 scores.

At No. 3, Aztecs’ Alexander Mandma and Judson Blair were on serve with the Wolf Pack’s Juan Batalla and Daniel Dudockin through the first six games, but in the seventh, Nevada broke the Aztecs to go up 4-3 and closed out the Scarlet and Black duo three games later. These same pairs met at Nevada on April 23, in both team’s regular season finale, but on that day the San Diego State duo earned a 7-5 victory. Mandma and Blair, at the No. 3 position, finish the year 3-3.

Joe Tyler and Victor Castro, playing at the No. 1 position against Nevada’s Matheo Coupu and Delmas N’Tcha, were broken in the third game, and were never able to break back. They lost 6-4, the same score and outcome against the Wolf Pack pair from a week ago in Reno. Tyler and Castro, the team’s top doubles combo, complete the campaign with a 7-6 record at the position and a 14-8 record overall.

Johannes Seeman and Roni Rikkonen and the Nevada’s Loris Zisswiller and Satchel Benn remained on serve into the 12th game, with SDSU up 6-5, when the Wolf Pack duo secured the doubles point. Seeman and Rikkonnen finish the season 2-3 when paired together.

In singles, the Aztecs got first set wins from Tyler, Seeman, and Mandma, but the first point went to the Wolf Pack, in the form of a 6-2, 6-2 victory by Zisswiller over Rikkonnen at No. 6, which moved Nevada two points clear of SDSU.

Mandma got San Diego State on the board from the No. 4 position with a 6-1, 6-2 decision over Benn. It is the second time the native of Tallinn, Estonia, has bettered Benn this season, after he beat him 3-and-3 a week ago on the Wolf Pack’s home courts.

Nevada then turned up the heat in two of the final four singles matches and took a pair of straight set wins to secure the final two points needed to win the match and advance to the championship.

Dudockin bested Blair, who earned the deciding point yesterday against Air Force 6-4 in the first set, before blanking him in the second 6-0 and taking the point at the No. 5 position. A sophomore out of Sprague High in Salem, Ore., Blair completes his season with a 9-10 mark in dual matches and 16-16 overall. His 16 wins are the second most on the team, trailing only Tyler’s 17.

Tyler, in what would turn out to be his final collegiate match, was up on Coupu 7-5, 5-2 and Seeman had won his first set 6-4 against Batalla and was tied 6-6 in the second at the point that Nevada secured the victory, and their matches went unfinished.