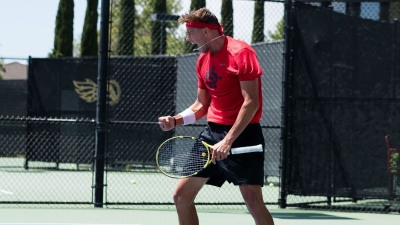 April 16, 2022 (San Diego) - On Saturday morning, in its final regular season appearance at the Aztec Tennis Center, the San Diego State men’s tennis team made short work of the New Mexico Lobos, taking the doubles point and then cruising to a 4-1 win in a Mountain West Conference matchup.

“This was a great Senior Day victory,” Aztec head men’s tennis coach Gene Carswell said. "We started off with a very efficient doubles point where we looked great at all three positions. It was fitting that Joe Tyler and Victor Castro were the last two matches to finish and clinch the Senior Day victory for Aztec men’s tennis.”

The Aztecs earned the doubles point behind Tyler and Castro’s 6-2 win. The No. 1 pairing improved its dual record to 6-3, 13-5 overall, easily the best mark at that position for SDSU this season. That win came on the heels of Judson Blair and Alexander Mandma’s 6-1 decision at No. 3, which improved that twosome’s record at the position to 2-1. In the No. 2 doubles match, Aztecs’ Johannes Seeman and Roni Rikkonen were up 5-2 at the juncture where San Diego State secured the doubles point and their match was not finished.

New Mexico got on the board at the No. 6 position with a 6-3, 6-3 win from Georgio Samaha over SDSU’s Rikkonen which trimmed the advantage to 2-1, but then the home team put the Lobos away.

The Aztecs took the match at the No. 1 spot and it was the senior Tyler, a native of Corby, England, who earned the victory for the team. He bested UNM’s Azkara 6-3, 1-6, 6-3 and is now 6-4 at dual match No. 1 singles this year and 15-8 overall. It was Tyler's final appearance at the Aztec Tennis Center.

The two singles matches which were not finished were in the third set; Seeman was trailing 5-2 and Mandma was down 2-0.