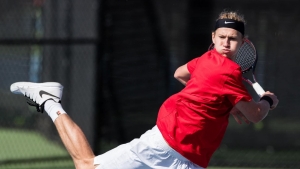 Aztecs’ Johannes Seeman improves to 7-2 at No. 1 singles

March 26, 2021 (San Diego) - Despite claiming the doubles point and an early singles encounter, the San Diego State men’s tennis team was unable to maintain a pair of leads, as visiting Washington rallied to deal the Aztecs a tough 4-3 defeat in a non-conference dual match on Friday at Aztec Tennis Center.

With the setback, SDSU drops to 3-7 on the year after suffering its seventh straight loss to the Huskies, who raise their record to 9-7 overall.

Johannes Seeman was a double winner for the Scarlet and Black, knocking off UW’s 83rd-ranked Clement Chidekh in straight sets at No. 1 singles 6-1, 6-4 after combining with Victor Castro to topple the pairing of Chidekh and Thibault in the top doubles position 6-2.

However, the Aztecs were unable to stem the momentum of the Huskies, who posted four victories in singles to escape with the match.

Following Seeman and Castro’s win to open the doubles round, Rafael Gonzalez Almazan and Roni Rikkonen were upended by Han-Chih Lin and Ewen Lumsden in the third spot 6-2.

Meanwhile on court No. 2, Ignacio Martinez and Judson Blair found themselves in a tight battle with Alexis Alvarez and Jack Davis but ultimately survived a marathon tiebreaker 7-6(10).

With a 1-0 advantage under their belts, the Aztecs looked to keep things rolling in singles; however, Castro was upended by Lumsden in the second position 6-2, 6-1, knotting the team scoreboard at 1-1.

Seeman followed with his impressive victory to put the host school in front 2-1, but Washington vaulted in front by claiming the next two decisions.

Moments later, SDSU squared the match at 3-3 when Rikkonen outlasted Jack Pulliam in the fifth position 6-1, 7-6(5).

That set the stage for a winner-take-all encounter on the No. 3 court where Gonzalez Almazan fought valiantly to extend his match to a third set after dropping the opener 6-2. However, his Husky adversary eventually prevailed in a tiebreaker 7-6(5), handing the Aztecs a disappointing loss.

San Diego State will look rebound next week when it travels to the Beehive State for a pair of matches at Utah (March 30) and Utah State (April 1).