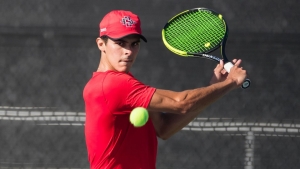 Aztecs overcome 3-1 deficit to defeat Lions on the road

March 21, 2021 (Los Angeles) - Playing the same opponent it lost to earlier in the week, the San Diego State men’s tennis team exacted a measure of revenge on Sunday after posting a dramatic 4-3 victory on the road over Loyola Marymount in a non-conference dual match at LMU Tennis Center.

The Aztecs (3-6) trailed 3-1 on the team scoreboard but rallied to claim the final three decisions in singles play, snapping a four-match losing streak in the process.

“I’m very proud of the way our team handled the adversity leading up to this match,” said SDSU head coach Gene Carswell. “We were facing a very tough team today, one that gave us a difficult time on our courts earlier in the week. But to see our guys overcome a difficult travel schedule and an early deficit in a challenging environment speaks volumes of their character. I couldn’t be more pleased with their determination.”

For the first time since Feb. 26, the Aztecs came away with the early doubles point, but it wasn’t easy. Johannes Seeman and Victor Castro outlasted Diego Nava and Daniel Moreno in the No. 1 position 7-6(5). The SDSU duo overcame two breaks of serve to even the score at 6-6 before winning in the tiebreaker.

The Aztecs opened with a victory in the No. 2 spot, where Ignacio Martinez and Judson Blair joined forces to defeat Ethan Prost and Emin Torlic by a 6-2 count. However, Rafael Gonzalez Alamzan and Roni Rikkonen could not duplicate the feat at No. 3, falling to Max Kaiser and John Bryan Otico by a 6-3 tally, setting the stage for the dramatics on the No. 1 court.

With a 1-0 lead to its credit, SDSU could not sustain the momentum early in singles play, as the Lions (3-6) recorded three straight wins to grab a commanding 3-1 advantage.

First off the court was Gonzalez Almazan, who was unable to solve Otico in a 6-1, 6-0 defeat at No. 3, while Blair experienced a similar fate in the sixth slot after dropping a 6-4, 6-0 decision to Torlic. Moments later, Rikkonen fell victim to Prost in the fifth position 6-4, 6-3 as the prospects for an Aztec comeback looked bleak.

However, the Scarlet and Black flashed its resolve, winning the next three encounters in three-set fashion.

Seeman came back from an early service break in the third set against Nava before emerging victorious 6-4, 4-6, 6-4 on the No. 1 court.

Meanwhile, Castro extended his match with Kaiser at No. 3 after surviving a grueling second-set tiebreaker. The Aztec sophomore vaulted in front for good on an early service break in the third set and kept his foot on the gas to win 3-6, 7-6(3), 6-3.

With the score knotted at 3-3, all eyes turned to the No. 2 court where Martinez was locked in a tight battle with Moreno. After dropping the first set 3-6, the SDSU senior answered the bell in the second to win handily 6-1. However, he soon found himself looking down the barrel of a 5-2 deficit but mounted a gritty comeback to stay alive. After saving two match points in the tiebreaker, Martinez finally prevailed, 7-6(8).

“Everyone’s been working hard in practice and the improvements are beginning to show on the court,” Carswell said. “Hopefully, we will continue to build as we move forward in our season.”

San Diego State will be back in action on Friday, March 26 when it plays host to Washington at Aztec Tennis Center starting at 2 p.m.