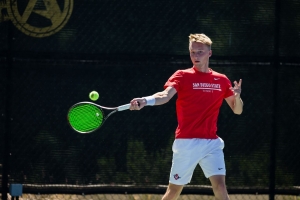 April 7, 2019 (San Diego) - San Diego State closed off its four-match homestand in style on Sunday with a 4-0 triumph over Nevada in a Mountain West clash at Aztec Tennis Center.

With the victory, SDSU completed its third shutout in the last two weeks and fourth of the season, improving to 11-8 on the year and 2-2 in conference play, while the Wolf Pack fall to 8-8 overall and 1-3 in the MW.

The Aztecs rested Rafael Gonzalez Almazan in singles, but David Hough stepped in admirably, cementing the Scarlet and Black’s win with a 6-2, 6-3 decision over Matvey Radionov in the No. 6 position.

Previously, Arnaud Restifo and Ignacio Martinez emerged triumphant, as each player finished the weekend at 3-0.  Restifo was the first SDSU competitor of the court with a 6-2, 6-1 conquest of Delmas N’tcha at No. 5, which extended his personal winning streak to four straight matches, while Martinez soon followed with 6-1, 6-3 victory over Jonathan Aremon in the fourth slot.

Three matches were suspended when the Aztecs collected the required fourth team point, including the No. 2 position, where Jan Kirchhoff owned a 3-1 lead in the second set over Kostya Nesterenko after prevailing in the first by a 6-4 tally. Over on court three, Fabian Roensdorf found himself trailing Jeremy Melville 3-2 in the second set after dropping a tiebreaker 7-6(4). In addition, Sander Gjoels-Andersen was in a tight battle with Julien Evrard at the top of the ladder but fell behind 4-3 in the second set after his Nevada adversary claimed the first, 6-4.

Despite playing its third match in as many days, SDSU still managed to claim its sixth doubles point in its last seven outings as well. Gjoels-Andersen and Martinez started the day with 6-3 victory over Evrard and Nesterenko in the No. 1 spot, while Restifo and Roensdorf completed the round moments later with a 6-4 decision over N’tcha and Daniel Dudockin at No. 3. Kirchhoff and Gonzalez Almazan also competed against Aremon and Melville at No. 2 but had their match against halted with the two sides deadlocked at 6-6.

“Today was the big test,” said Aztec head coach Gene Carswell. “How were we going to respond playing in our third straight match, and I thought we did a great job. To be able to close out the match 4-0 at No. 6 with David Hough was fantastic. He’s been playing great tennis lately, and he’ll be an important of what we do down the stretch. But overall, to be able to show up mentally ready to play today speaks to the resiliency of this group. Even though they were tired, we competed well at all of our spots and that’s a credit to the players as we get closer to the conference championships.”

San Diego State will play its final two road matches of the regular season next weekend when it travels to Air Force on Friday, April 12, followed by a showdown at New Mexico on Sunday, April 14.