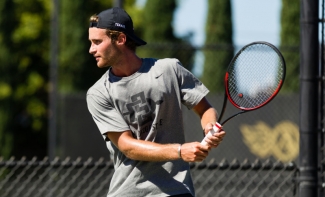 Aztecs fall to 0-3 on the season

February 2, 2018 (Santa Barbara) - The visiting San Diego State men’s tennis team came up short in its third dual match of the 2018 campaign, falling to UC Santa Barbara on the road Friday by a 6-1 count at the Recreation Center Courts.

With the loss, the Aztecs remain winless on the year at 0-3, while the Gauchos move to 2-1 overall.

SDSU found itself trailing 1-0 after yielding the early doubles point. The pairing of senior Santiago Cevallos and sophomore Arnaud Restifo had no answers for UCSB’s 44th-ranked tandem of Nicolas Moreno de Alboran and Anders Holm in a 6-0 defeat at No. 1, while the duo of junior Sander Gjoels-Andersen and sophomore Nicholas Mitchell fell victim to the combo of Simon Freund and Joseph Rotheram, 6-4, in the second spot. Over on court No. 3, junior Raul de la Torre and sophomore Rafael Gonzalez Almazan held a slim 6-5 advantage when their match against Joseph Guillin and Victor Krustev was abandoned.

Stung, the Aztecs were unable to generate any momentum in singles play, dropping five of six encounters. SDSU’s lone win of the afternoon was recorded in the fourth position, where Gjoels-Andersen snapped a personal six-match slide with a straight-set triumph over Holm, 7-6(4), 6-4.

However, the Gauchos had already clinched the team victory by that time after claiming the first four decisions. Playing in the No. 3 spot, sophomore Joel Popov was dispatched by Guillin, 6-2, 6-0, while Gonzalez Almazan kept things close against Hironori Koyanagi before experiencing a 6-4, 6-4 defeat. In addition, Restifo found himself in a tight battle during the first set of his match with Freund on the No. 2 court, but was unable to narrow the gap in a 7-5, 6-2 setback.

In the final two matches of the day, freshman Jan Kirchhoff fought tooth-and-nail during the second set with Krustev, but could not extend his encounter in a tough 6-3, 7-6(6) loss at No. 5. Meanwhile, Cevallos raced to an early lead against 42nd-ranked Moreno de Alboran at center court before his UCSB adversary stormed back in the final two sets to win, 4-6, 6-1, 6-3.

San Diego State will have little time to dwell on its defeat as the Aztecs resume their road trip on Saturday, Feb. 3, with another non-conference match at Cal Poly. First serve at Mustang Tennis Complex is set for noon PT.