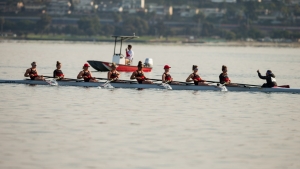 March 17, 2019 (Gold River, Calif.) - San Diego State rowing completed day two of the Hornet Invitational on Sunday with two first place finishes, one second and one third place time in its four events against Kansas State to wrap its weekend on Lake Natoma.

In the 8 a.m. event, SDSU’s varsity eight crew improved upon its Saturday times and one again finished first, coming in with a time of 6:31.4 while the K-State crew completed the course in 6:35.3.

“We had a slightly different lineup going into this race, but right from the start of the warm up it felt great,” sophomore coxswain Hannah Broadland said after the varsity eight win. “On our start, we moved up five seats and continued to lengthen our lead throughout the body of the race. This was an improvement from our race against Sacramento State because we consistently increased our lead instead of staying at the same distance. In our sprint, we worked to keep our open water lead, ending in first place. All in all, a great weekend of racing. Three wins for the V8.”

In the second varsity eight event, the Aztecs were unable to get ahead of the Wildcats as K-State completed its 2k in 6:39.8, while SDSU finished in 6:52.4. The Wildcats entered an A and a B boat in the varsity four race at 8:40 a.m., with their crews crossing the finish line in 7:27.5 and 7:33.7, respectively, both coming in ahead of the Aztecs, who completed the event with a time of 7:42.2.

The Scarlet and Black claimed their second first-place finish of the morning in the third varsity eight event at 9 a.m., finishing with nearly a three-second edge over K-State with a time of 7:06.8, while the Wildcats came in at 7:09.5.

The Aztecs return to America’s Finest City to prepare for the annual San Diego Crew Classic, which is set for Saturday and Sunday, April 6 and 7 on Mission Bay.