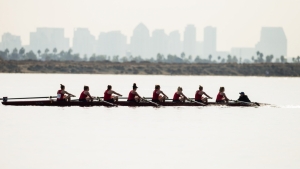 The Aztecs raced three boats in the open eight event at 7:45 a.m. where the A boat claimed a close second to USD’s A boat with a time of 17:02.990, just three seconds behind the first place Toreros. The SDSU B boat was not far behind, finishing in third in 17:28.873, while SDSU C came in 20 seconds behind fourth-place finisher UCSD A to claim fifth with a time of 18:02.037. Trailing the Aztecs’ three open eight boats were crews from USD, UC Santa Barbara, UCSD, UC Irvine, Long Beach State and Orange Coast College.

The 8:55 a.m. novice eight race was a success for the youngest Aztec crew, which claimed first place with its finish time of 18:29.776. The SDSU novice eight created a major gap between itself and second place finisher, USC A, which finished a minute later in 19:29.083. The Aztecs also defeated its competitors from Arizona State, USD, UCI, OCC and LBSU in the event.

The San Diego Fall Classic marks the final event of the Aztecs’ fall schedule. The Aztecs will take in its race experience from today’s event and its top finishes at the Row for the Cure and continue to prepare for the regular season in the spring of 2019. SDSU opens its spring slate on Feb. 9, 2019 with a scrimmage vs. Minnesota on Mission Bay.