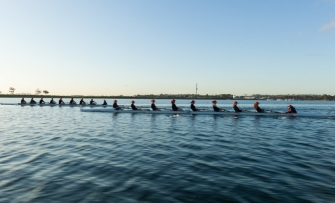 March 18, 2018 (Gold River, Calif.) - The San Diego State rowing team competed in day one of the Hornet Invitational, hosted by Sacramento State, Saturday on Lake Natoma. The Aztecs participated in seven races over the course of the day, finishing first in five of the events.