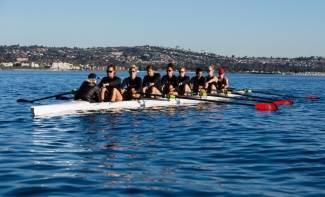 “We got off to a good start, sitting a couple seats up from the start,” senior Sara Avery said. “We continued to move within the first 500 and had a bow to stern lead by the 750 mark. The boat felt controlled and calm, and our stroke rate was probably a little lower than we would’ve liked. It would’ve been better to have a bigger margin between us and LMU, but a win is a win and we are excited to be getting more racing experience and are looking forward to the next week of training.”

“We has a solid start, up half a boat length off the start and broke contact at 500 meters,” senior Hannah Gasser and junior Emaleigh White commented. “[We] settled to body stroke rate at 36. Over the whole race, we continued to increase the margin between us and LMU to nearly 17 seconds of open water by the end of the race.”

The Aztecs prepare for their race against UCSD on Friday, April 20. The first race is tentatively scheduled for a 7 a.m. start at the Olympic Training Center in Chula Vista, Calif.