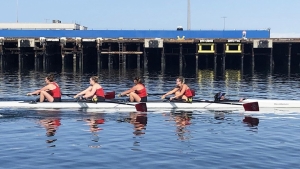 “Today’s races were a good way to start the year,” head coach Bill Zack said. All three races went very well. We know what we need to work on for our next competition, the San Diego Crew Classic.”

The Aztecs’ first varsity eight boat got off to a great start and led for the first 500m before USC was able to catch them. SDSU finished in 7:20.07 and USC crossed the finish line in 7:10.0.

SDSU’s second varsity eight also had a good start and held the lead until the final sprint. The Aztecs finished in 7:35.09, just behind USC’s 7:33.49.

The Aztec varsity four, composed of four freshmen and one sophomore, jumped out to a lead and then continued to further themselves from the Women of Troy as the race went on. SDSU finished in 8:41.96, nearly 15 second ahead of USC (8:56.2)