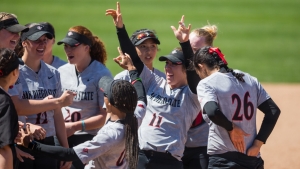 The Aztecs scored in every inning but the top of the second, scoring once in the first, five times in the third, three in the fourth and once in the fifth.

Shelby Thompson and Taylor Adams each went 3-for-3 with two RBIs to lead SDSU. Thompson scored two runs, while Adams scored once.

Kiera Wright was 2-for-2 with two runs, two stolen bases, a walk and a sacrifice bunt. Wright is now 17-for-17 on the season in stolen base opportunities.

San Diego State’s 10 runs were its second most this season and most since beating UIC 13-8 on March 1.

The offense was plenty for Alicia Garcia and Marissa Moreno in the circle. Garcia (6-6) earned the win after allowing one run - a solo homer in the bottom of the fourth - on four hits and a walk over four innings. Moreno pitched the fifth, yielding one run on a hit and a walk, finishing the game with a strikeout.

San Diego State improved to 12-4 on the season when scoring first.

The Aztecs picked up their second run-rule victory of the season and first in MW play.

The Aztecs and Wolf Pack play the final game of the series at noon on Sunday.