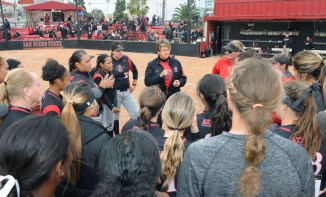 Two of the transfers come from 2018 NCAA tournament teams

James redshirted last year at Ohio State, which already had four pitchers on the team.  The Buckeyes were beaten by Florida in the NCAA Gainesville Regional final. James, who was a scholar-athlete in her one season at OSU, played her prep ball at Patrick Henry High School in San Diego. James was a three-time all-Eastern League and a three-time CIF selection at PHHS, where she was 63-21 over her four seasons (according to MaxPreps) with a 2.20 ERA in 519 innings. She struck out 477, while limiting the opposition to a .229 average. At the plate as a senior, James hit .400 (36-for-90) with 10 homers, nine doubles, 42 RBIs and 25 runs scored.

Johnson, meanwhile, appeared in 13 games with five starts at Cal State Fullerton in 2018 for a team that won the Big West Conference and beat third-seeded UCLA, before succumbing to the Bruins in the NCAA Los Angeles Regional final. Johnson was 1-4 with a 9.69 ERA in 21 2/3 innings, striking out 12 batters. Johnson played her high school ball at La Habra High School in La Habra, Calif., where she earned first-team all-orange county accolades, second-team OC Register all-county honors and first-team all-league recognition as a senior, and second-team all-OC, second-team OC Sidelines and Whittier Daily News all-area honors as a junior. A scholar-athlete, Johnson was also the team’s defensive player of the year each of her final two seasons.

Garcia comes to The Mesa after a fantastic 2018 at Palomar College under head coach and former Aztec Lacey Craft, where she was 27-1 with a microscopic 1.15 ERA in the circle. In 146 innings, she struck out 184, starting 29 of her 30 appearances. Garcia also excelled at the plate, batting .405 (62-for-153) with two home runs, 36 RBIs and 44 runs. Palomar ended the season with a 41-5 record before falling in the state championship. Garcia spent her 2017 season at Tyler CC in Texas after prepping at Mira Mesa High School.

San Diego State is coming off a 20-31 overall record in 2018, including an 11-13 mark in MW play for sixth place. The Aztecs won six of their final eight games of the season, including two of the final three series.