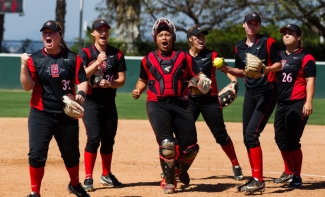 The Aztecs are scheduled to play 17 contests against teams that made last year’s NCAA tournament.

SDSU is coming off a 31-18 overall record in 2017 - its 12th consecutive 30-win season - and a 15-9 mark and runner-up finish in MW play. San Diego State, however, did not receive an at-large bid into the NCAA tournament, despite finishing second in the sixth-best conference in the nation (out of 32 leagues).

On the docket for San Diego State in 2018 is a game against a 2017 Women’s College World Series qualifier (UCLA), four against teams that finished among the top 25 in the NCAA RPI (Georgia, Kentucky, Minnesota and UCLA), 11 games against the top 50 and 35 games versus the top 100.

The Aztecs begin their season on the road for the 11th straight year, playing at the Kajikawa Classic in Tempe, Ariz., from Feb. 8-11. SDSU kicks off the 2018 slate on Thursday, Feb. 8 with games against Georgia (NCAA tournament qualifier) and Stanford, followed by another doubleheader on Friday, Feb. 9 with games vs. Western Michigan and Northwestern, and single games against Nebraska (Saturday, Feb. 10) and UC Davis (Sunday, Feb. 11).

The Aztecs return to America’s Finest City the following weekend (March 1-4) for the San Diego Classic I, which they co-host with Univ. of San Diego. On the slate for SDSU are UCF on Thursday, March 1, NCAA tourney team and No. 13 in the final RPI Minnesota and CSUN on Friday, March 2, Boston Univ. on Saturday, March 3 and UCLA (No. 2 in the final RPI) on Sunday, March 4.

San Diego State kicks off the 2018 MW schedule with a weekend series at San Josè State from March 16-18, followed by a home non-conference meeting with San Diego on March 27.

The NCAA Regional kicks off postseason play from May 17-20 at 16 campus sites.